Rahul had been evicted from the crease with just a run away from a personal milestone of untold significance. 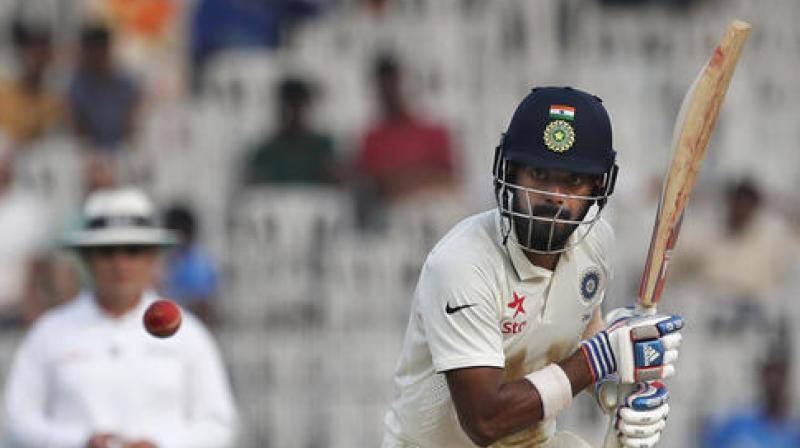 Chennai: Until the 311th delivery he faced, K.L. Rahul would have been busy mapping out ways to usher in celebrations for his maiden double hundred. He would have been thinking of raising his sweat-stained arms aloft in pristine bliss and looking skywards, sans the cumbersome burden of a helmet, to thank the heavens, assuming that he is not an atheist.

But, instead, the 311th delivery saw him sink to his knees in utter despair accompanied by a whole gamut of emotions swirling in his cluttered mind. More than the pain caused by the  forearm injury which laid him low last month, what must have hurt him more was the moment the realisation dawned on him that he had been evicted from the crease with just a run away from a personal milestone of untold significance.

His voice choked with emotion at the media interaction but he regained his sangfroid.

On what he felt at his dismissal: It was a good day till I got out. I was looking to play positively and the chances that I took paid me dividends. It was unfortunate that the pressure of getting to a double hundred got to me. But I will go  back home happy that I got 199 crucial runs for my team.

On batting with Karun Nair: It was important in the scheme of things to get that partnership going. Karun and I have played cricket together since we were 11. His family was here watching the game and both our families would be proud watching us play together. I’m happy that Nair is still batting after getting his 50. He has looked confident and it was important for him to get these runs as well.

On the match scenario: It’s important for us to take a sizeable lead and our aim is to bat for five or six sessions and pile on the runs. If we get a lead of 150 runs, it will put England under pressure. We expect the wicket to deteriorate on the fifth day.

On getting injured and making adjustments: It’s tough coming back from injury. I was injured after playing in the Vizag Test, so the fear of getting injured always plays on your mind. After getting picked for Mumbai Test, I felt it was important to go out there and not think about the pain and keep doing what I have been doing for the last six to eight months.

On opening with Parthiv: The right-left combination makes it difficult for the opposition bowlers to adjust. It doesn’t really matter who you are opening with if you can keep the bigger picture in mind and focus on what you have to do.

On what happened in the dressing room after he got out: I couldn’t hear what was being said as my mind went blank. Many team-mates came up to me and congratulated me on the effort but I was disappointed. It hasn’t sunk in yet as it is never a nice feeling to get out on 199. I got my first international duck in Vizag and now I was out on 199. So I’m going through a lot of emotions in this Test series.