Controversy arose when Perera began walking back after his dismissal before turning around and requesting a review. 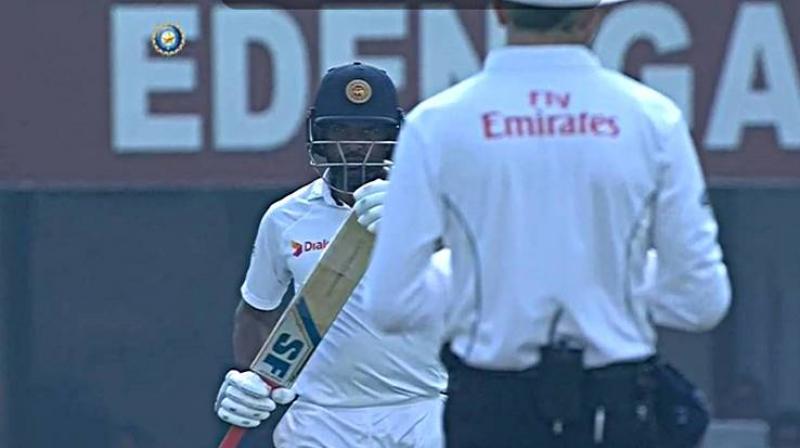 "Contrary to the assumptions made, there was no 'message from the dressing room' involved in the requested review," Sri Lanka Cricket said in a statement. (Photo: Screengrab)

Kolkata: Sri Lanka's cricket board on Sunday defended Dilruwan Perera after television replays suggested the batsman looked to the dressing room during a delayed review call in the first Test against India. Perera, who was involved in a crucial 43-stand eight-wicket with Rangana Herath, was adjudged leg before wicket on nought but following a successful challenge stayed on for a 34-ball five on day four in Kolkata.

Controversy arose when Perera started to walk away after Mohammed Shami's in-dipper hit his pads, then began walking back before turning around and requesting a review. Although the Indian players did not complain, there was speculation -- including from television commentators -- that he had received advice from the Sri Lankan dressing room.

Players are not allowed to receive outside input while challenging an umpire's decision.

"Contrary to the assumptions made, there was no 'message from the dressing room' involved in the requested review," Sri Lanka Cricket said in a statement.

"Having mistakenly assumed that Sri Lanka were out of reviews, Dilruwan Perera had turned to leave the field when he heard Rangana Herath inquire from the on-field umpire Nigel Llong if Sri Lanka have any reviews left, to which Mr. Llong answered in the affirmative," the statement added.

"It was then that Dilruwan requested the review," it said.

The incident recalled Australian skipper Steve Smith's infamous "brain fade" moment earlier this year, when he looked up to the dressing room while reviewing an on-field call during the Bangalore Test. While Smith said it was a one-off that happened in the heat of the action, Indian skipper Virat Kohli accused the Aussies of cheating.

Sri Lanka said their players are "respectful and bounden to uphold the rules and regulations of the ICC (International Cricket Council)". Herath, whose defiant 67 helped the visitors take a 122-run first innings lead, backed his teammate after he was drawn into the drama from the non-strikers end.

"I was asking for review (from) umpire Nigel Llong, maybe Dilruwan also heard that and after that he asked for it. I did not call him back, I was asking for a review, that's all," said Herath.

Indian paceman Bhuvneshwar Kumar played down the incident, saying that his team players were busier celebrating than looking at Perera. The visitors are seeking their first Test win on Indian soil in the three-match series.