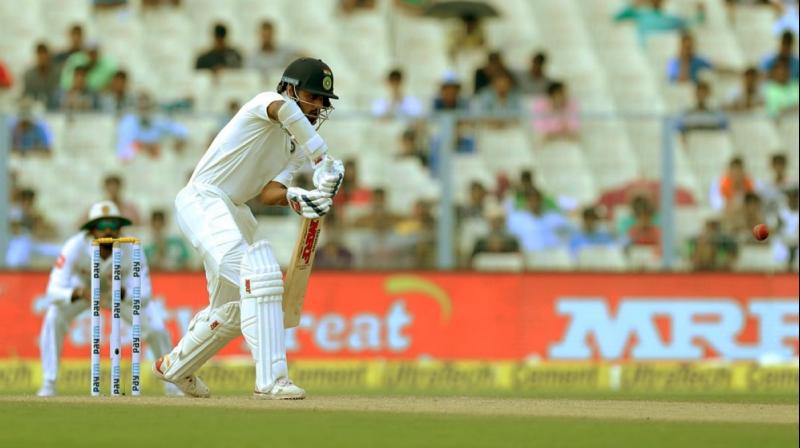 After bundling out for 172 in the first innings, KL Rahul and Shikhar Dhawan boosted India’s hopes of a comeback win with a crucial century partnership on Day 4 of the first Test at the Eden Gardens here on Sunday. The hosts struck 171-1 in the third innings as Virat Kohli’s men gained a 49-run lead in the match after they were left trailing by 122 runs.

With the wicket easing out, the Sri Lankan bowlers found it difficult to tame the opposition batsmen as they gained control. Though Rahul played some delightful strokes, it was Dhawan who went after the bowlers. The southpaw missed out on another century by 6 runs as he seemed in a hurry to reach the feat.

After the previous two days were rain-curtailed, the chances of a draw seem big for both sides with one last day to go.

Earlier in the second innings, Bhuvneshwar Kumar and Mohammed Shami put up a fantastic display of swing bowling but Rangana Herath's half-century (67) denied India a chance to run through the Sri Lankan order cheaply and took the visitors’ lead to 122 runs on Day 4 of the first Test here at the Eden Gardens on Sunday.

Shami (4/100) and Bhuvneshwar (4/88) kept India in hunt as the two shared six wickets between themselves on the penultimate day of the opening Test of the series. While Shami, who had some injury concerns on Saturday, dismissed Niroshan Dickwella, Dinesh Chandimal, Dilruwan Perera and Suranga Lakmal, Bhuvneshwar removed Dasun Shanaka and Herath, in addition to his two wickets - Dimuth Karunaratne and Sadeera Samarawickrama - on Saturday.

Sri Lanka, were 201/7 as India harboured thoughts of restricting their lead. However, Herath denied India that chance as he and Dilruwan Perera put in a 43-run stand. The partnership also had a moment when Perera seemed to have taken dressing room help over DRS.

Indian openers KL Rahul and Shikhar Dhawan have gone past Sri Lanka's first inning lead and look to turn tables on the visitors here at the Eden Gardens on on Day 4 of the first Test on Sunday.

Dhawan misses out on a century by 6 runs after umpire Nigel Llong declares him out for a faint edge. The southpaw steps down the track and aims for a drive on a fullish delivery by Shanaka, which nips back in and kisses the willow. Snicko reviews show there's a faint touch.

Class from KL Rahul and Shikhar Dhawan this. The hosts have looked in complete control from the word go, striking an average of 4 runs per over. They now trail by 66 runs with 10 wickets in hand.

Pressure on Sri Lanka as KL Rahul and Shikhar Dhawan provide a decent start for the hosts. What's worse for Dinesh Chandimal is that strike bowler Lakmal is having a niggle in his right knee. Gamage to continue.

WICKET! Mohammed Shami has his 4th as he disturbs the timber to end Lakmal and Sri Lanka's innings.

WICKET! Herath departs. Finally. Bhuvneshwar Kumar has his fourth. But Herath and the Sri Lanka should be might pleased with the veteran spinner's effort. His 67 has the potential to change the course of the match.

WICKET! The Rangana Herath-Dilruwan Perera partnership is finally broken. The two added 43 to take Sri Lanka's lead to 76. Handy partnership but it is over courtesy a Mohammed Shami beauty.

WICKET! It's raining wickets at the Eden Gardens. Dinesh Chandimal's poke and survive approach does him in. He edges one and Saha takes it. Shami has his second. India on a roll. Sri Lanka, in lead, but in trouble.

WICKET! Dasun Shanaka reviews the LBW decision. But no avail. Bhuvneshwar Kumar has struck for the third time in the innings and for the first time on Day 4. Sri Lanka have lost two wickets in two over. India are back in this game.

WICKET! Mohammed Shami has broken through. The partnership between Dinesh Chandimal and Niroshan Dickwella comes to an end as Virat Kohli takes an easy catch to send Dickwella packing. A much-needed wicket for India.

While Sri Lanka trail by just seven runs, India feel still feel they have a chance as the play kicks off on Day four of the first Test here at the Eden Gardens on Sunday.

While the Indian top order, barring the exception of Cheteshwar Pujara, failed to get going in the first innings, the lower middle order and bowlers put up their hands and chipped in with some crucial runs to help India reach 172.

Just when it looked the two will run away with the advantage, Umesh Yadav managed to remove the two and keep India in a hunt on a day when Mohammed Shami left the field injured, Ravindra Jadeja did not bowl and R Ashwin was not used much.

However, the Indian spin duo will come into play more on Day 4 if the brights sunlight presents itself over the Eden Gardens.

Hello and welcome to Day 4 of the 1st Test here at Eden Gardens #INDvSL pic.twitter.com/yymezbTkep

All and all, we have an interesting day on our hand; a day which will potentially decide the outcome of the match. Obviously, if the rain and bad light don't play spoilsport.