The first T20I was abandoned due to rain and with this victory, India took a 1-0 lead over South Africa in the three-match T20I series. 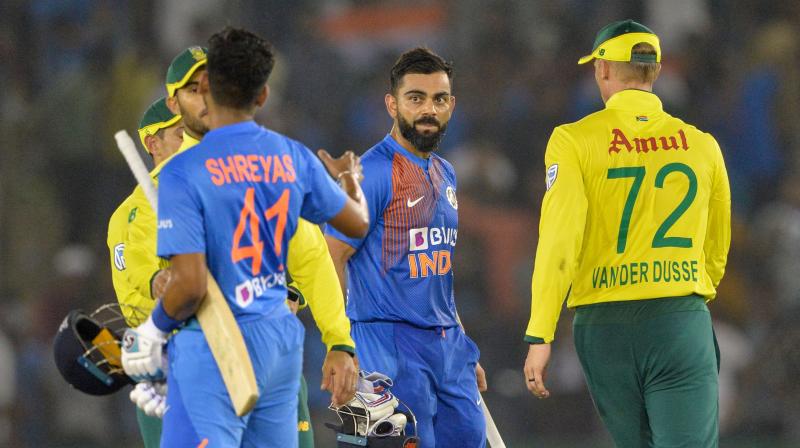 The first T20I was abandoned due to rain and with this victory, India took a 1-0 lead over South Africa in the three-match T20I series.

Chasing a decent target of 150 runs, India got off to a stunning start as both the openers, Rohit Sharma and Shikhar Dhawan, came out furiously on the Proteas bowlers.

Sharma smashed two sixes in the second over and in the next over, Dhawan scored two consecutive boundaries. However, Sharma (12) was given LBW in the fourth over, bowled by Andile Phehlukwayo.

India skipper Kohli then took the field and played cautiously with Dhawan. Both stitched a 61-run partnership before David Miller caught an outstanding catch at long-on off Tabraiz Shamsi's delivery to end Dhawan's 40-run innings.

Kohli was then accompanied by Rishabh Pant on the field but they failed to form a partnership as the latter was dismissed after scoring four runs. Shreyas Iyer then came out to bat.

Both Kohli and Iyer kept the scoreboard running and in the 17th over, Kohli completed his half-century. The match came to a point where India needed 12 runs off 12 deliveries. Kohli and Iyer made no mistake and took their side over the line and secured a seven-wicket victory. Kohli scored an unbeaten 72 runs while Iyer scored unbeaten 16 runs.

Earlier, after being sent to bat first, South Africa had a good start as Reeza Hendricks and skipper Quinton de Kock struck regular boundaries. Deepak Chahar provided India with their first breakthrough as he dismissed Hendricks (6) in the fourth over.

Temba Bavuma then came out to bat and batted brilliantly along with De Kock. De Kock scored his half-century. Soon after the half-century (52), he was sent back to the pavilion by Navdeep Saini after Virat Kohli caught an impeccable catch.

Rassie van der Dussen was the next batsman but failed to leave a mark as he scored only one run before Ravindra Jadeja caught and bowled him in the 13th over.

Der Dussen's dismissal brought David Miller out on the field. Both Miller and Bavuma put another 37 runs on the board, providing their side with some momentum. Chahar struck again in the 18th over and this time he took the wicket of Bavuma, who fell one run short from scoring his half-century.

In the next over, Miller too followed Bavuma back to the pavilion after scoring 18 runs. Dwaine Pretorius and Andile Phehlukwayo were the next batsmen. Both smashed one six each in the last over, bowled by Navdeep Saini, to help their team put a respectable total of 149 runs.

The third T20I between India and South Africa will be played on September 22 at M. Chinnaswamy Stadium.