Bavuma, who played a knock of 49 runs, said that for him, it is always the team that matters, not his personal ambitions. 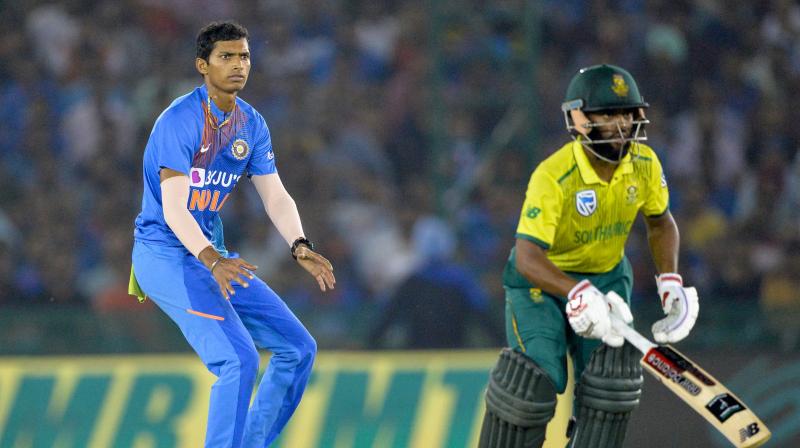 After India beat South Africa by seven wickets, batsman Temba Bavuma said that the Indian team is 'formidable but not unbeatable'. (Photo:AP)

Mohali: After India beat South Africa by seven wickets, batsman Temba Bavuma said that the Indian team is "formidable but not unbeatable".

"They are a formidable team but I do not think they are unbeatable side," South Africa batsman Bavuma said in the post-match press conference.

India secured a seven-wicket victory over South Africa in the second T20I here at PCA Stadium. The first T20I was abandoned due to rain and with this victory, India took a 1-0 lead in the three-match series.

Bavuma, who played a knock of 49 runs, said that for him, it is always the team that matters, not his personal ambitions.

"I do not see myself as a selfish person. I try and always put the team ahead of all personal ambitions. It is always about the team," he said.

South Africa posted a target of 150 runs for India. However, Bavuma said that he was hoping to get a total of at least 180 runs as they had a good start in the beginning.

"At the half-way stage, I was thinking 180 at least and that would have been a very competitive score. I think we were just not able to get going and I am also to be blamed as I was not really able to get the momentum and all the other big hitters," Bavuma said.

There is one department where the South African team, also known as Proteas always shine and that is their fielding. This match was not an exception as David Miller caught a stunning catch to send Shikhar Dhawan back to the pavilion.

Praising his teammate David Miller, Bavuma said: "I think David Miller's catch was quite phenomenal. I was at the boundary and thought that it was a six. So, how he managed to get his hands on the ball was spectacular. We really like to be counted as the number one fielding side in the world."

The third T20I between India and South Africa will be played on September 22 at M. Chinnaswamy Stadium.