The actor found himself in a fix for his recent tweet with Indian all-rounder Hardik Pandya. 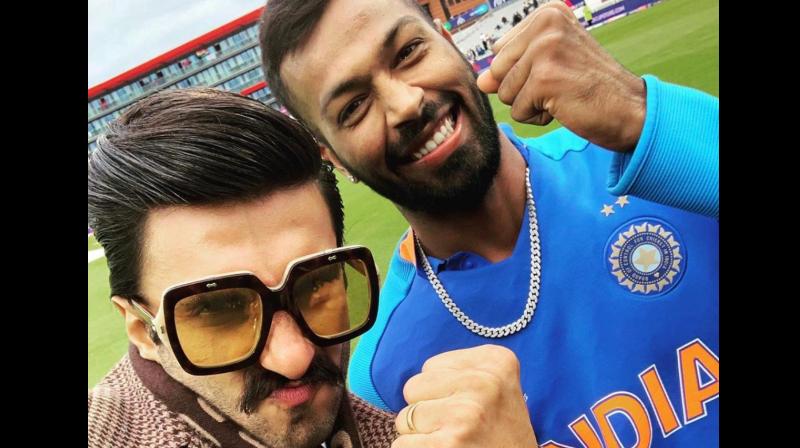 Ranveer used the phrase with a minor change while posting a selfie with Hardik Pandya on Twitter. (Photo: Ranveer Singh/Twitter)

Mumbai: Ranveer Singh is currently shooting for his upcoming movie '83 in London, England. The actor found himself in a fix for his recent tweet with Indian all-rounder Hardik Pandya.

Ranveer Singh received a warning from Paul Heyman, who is the manager of World Wrestling Entertainment star Brock Lesnar.

Paul Heyman has blamed that Ranveer has used the war cry of Brock Lesner, which he uses while entering the WWE ring. The war cry reads: "'Eat, Sleep, Conquer, Repeat".

The war cry is also printed on the back of Lesnar's outfits. Ranveer used the phrase with a minor change while posting a selfie with Hardik Pandya on Twitter.
He posted a selfie and wrote, "Eat. Sleep. Dominate. Repeat. The name is Hardik. Hardik Pandya. @hardikpandya7 ma boi #unstoppable."

The actor went to watch the highly anticipated match of ICC World Cup 2019-- India vs Pakistan at Trafford in England where he met all the players and clicked pictures with them.