To break up the leading four of England, Australia, New Zealand and India, Bangladesh ought to beat at least one of them. 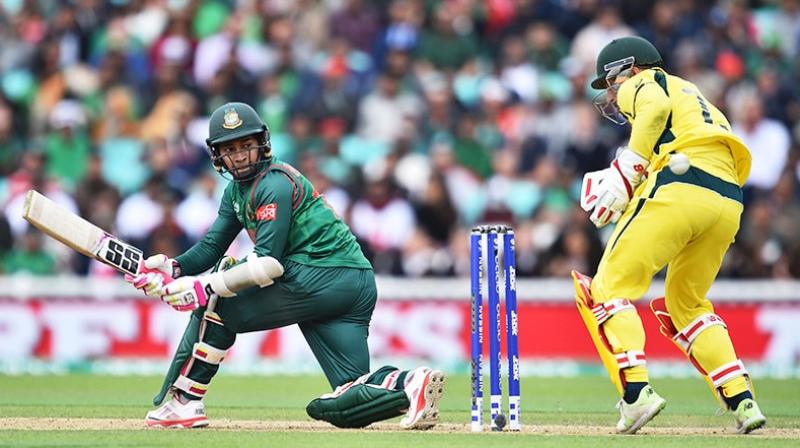 Bangladesh has only one win against Australia in 20 one-day internationals, in 2005 in Cardiff. (Photo: AFP)

Nottingham: Bangladesh doesn't have to knock off Australia on Thursday to reach the Cricket World Cup semifinals. It would be a massive step in that direction if it did, though.

To break up the leading four of England, Australia, New Zealand and India, Bangladesh ought to beat at least one of them.

Chances were missed against New Zealand and England, the only two losses in five group games for Bangladesh so far.

Australia is the next chance, at Trent Bridge.

Bangladesh has only one win against Australia in 20 one-day internationals, in 2005 in Cardiff. Bangladesh captain Mashrafe Mortaza is the only survivor from either side. He trapped Australia opener Adam Gilchrist for a duck.

Australia reacted to the shock defeat a week later by crushing Bangladesh by 10 wickets with 31 overs to spare. The Australians haven't lost to Bangladesh again, and never in the World Cup, and the odds are strong the streak will continue on Thursday.

But this isn't the once-in-a-blue-moon Bangladesh of old. The players are breathing rarefied air at this World Cup. They posted their highest ODI score of 330 in their World Cup opener, and South Africa was flattered to get within 21 runs of them. They went on to achieve their highest run chase, reaching 322 to demoralize the West Indies by seven wickets with eight overs left.

Mashrafe, Mushfiqur Rahim, Shakib Al Hasan, Tamim Iqbal and Mahmudullah - Bangladesh's top five ODI appearance-makers with nearly a combined 1,000 - have been the backbone of the team's rise to respectability. They are playing their last World Cup together and enjoying rolling the dice.

So far, so good

With able support from Mohammad Saifuddin (nine wickets), Mustafizur Rahman (seven wickets), and - off the bench - Liton Das (a 94 not out), Bangladesh has growing belief that it has the depth and the fight to go far.

But Australia is also in high spirits, bolstered by the return to fitness of Nathan Coulter-Nile and, especially, allrounder Marcus Stoinis. He strained his left side while bowling against India 10 days ago and missed the wins against Pakistan and Sri Lanka.

Mitch Marsh was summoned on standby as a like-for-like replacement for Stoinis, but he was sent back on Tuesday to join Australia's A side on tour in the United Kingdom.

Marsh became surplus after Stoinis bowled for an hour on Tuesday to prove he's recovered. Australia welcomed the sight, because the absence of the team's sole allrounder unbalanced the side and made them leave out specialist spinners Adam Zampa and Nathan Lyon.

Part-time spinners Glenn Maxwell and captain Aaron Finch were employed, and Australia got away with it against Pakistan and Sri Lanka.

"We need to be a flexible squad to win a World Cup," assistant coach Brad Haddin says. "We make sure each and every player is ready for game day. One of the luxuries at the moment is we're still winning, and we still haven't found the perfect rhythm for our game, which is a dangerous sign."

The Australians brought in left-arm spinner Ashton Agar from the A squad this week to bowl at the top order and remind them how Shakib, who has five wickets, plays.

But Bangladesh is coming, too.