Sports   Cricket  19 Jun 2017  You can only do so much against Fakhar Zaman’s unorthodox batting style: Virat Kohli
Sports, Cricket

You can only do so much against Fakhar Zaman’s unorthodox batting style: Virat Kohli 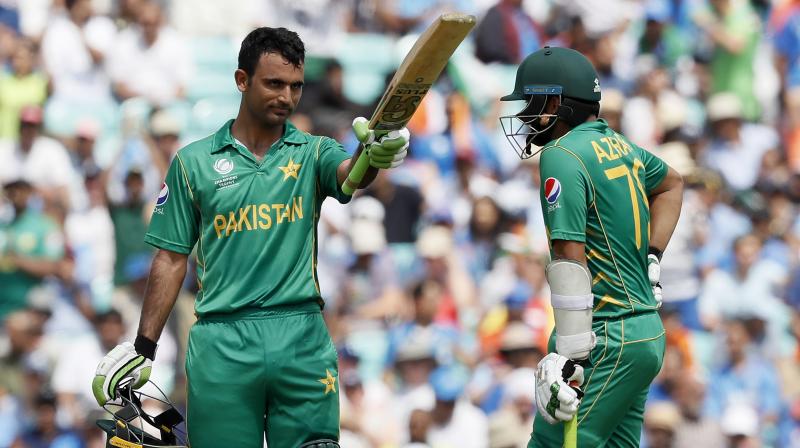 London :  India captain Virat Kohli  praised  Fakhar Zaman’s batting approach and said 80 percent of his "high risk shots" came off well. This made it difficult to counter his approach during the Champions Trophy final, at The Oval, in London, on Sunday.

Riding on Zaman’s maiden’s century Pakistan pulled off an upset victory over India in ICC Champions Trophy final. Zaman's 114 laid the foundation for Pakistan innings and helped them reach to a huge total of 338 for 4, which they defended successfully.

When asked about the 27-year-old’s blitzkrieg, Kohli said that it becomes difficult to contain an unorthodox batter like Zaman.

"When a guy like Azhar Ali, who is a conventional batsman, plays his shots, you can still have a plan,” said Kohli to reporters after the match. “But for a guy like Zaman, it becomes really difficult to stop players like him, because I think 80 per cent of his shots were high-risk and they were all coming off.

"So you can only do so much, as I said, as a bowler and as a captain when that is happening. Sometimes, you have to sit and say, the guy is good enough on the day to tackle anything,” Kohli continued.

“As I said, you can do little to control when people are going well like that, and we certainly tried to make them hit in areas that we felt it would be uncomfortable, but we just didn’t have anything going our way in that partnership (Zaman-Azhar). We tried our best to hit good areas but they just batted really well today,” he further said.

India had a disappointing day with both the bat and the ball, as Pakistan completely dominated the match. However, the Men in Blue made an unusually high number of unforced errors against their arch-rivals, something that has not gone under the radar of their iconic captain.

"25 extras is a bit too much in a game like that, and that’s something that we certainly need to take care of in the future,” said Kohli. “Obviously, the same bowlers are going to play, the same guys are going to bat. But the more consistent you get in learning from games like this, it’s better for the team in the future.”