Pakistan leapfrogged Sri Lanka and Bangladesh to move closer to direct qualification for the 2019 World Cup. 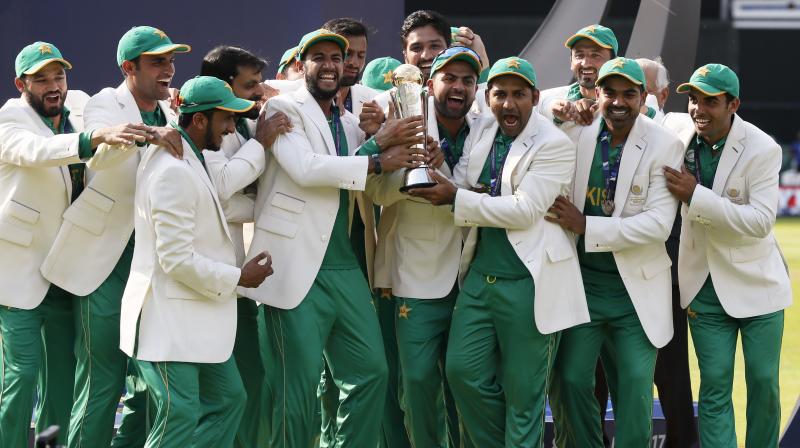 Pakistan players celebrate during the award ceremony for the ICC Champions Trophy at The Oval in London on Sunday. (Photo:AP)

Dubai: Pakistan today jumped two places to sixth in the ICC ODI team rankings following their title triumph at the Champions Trophy while the finalists India remained at number three.

Pakistan leapfrogged Sri Lanka and Bangladesh to move closer to direct qualification for the 2019 World Cup, for which host England and the next seven highest-ranked sides as on 30 September will get straight entries.

Pakistan gained four points to move to 95 points as their wins over higher-ranked opponents in the tournament included the one in the final against India and an eight-wicket semi- final victory over England. 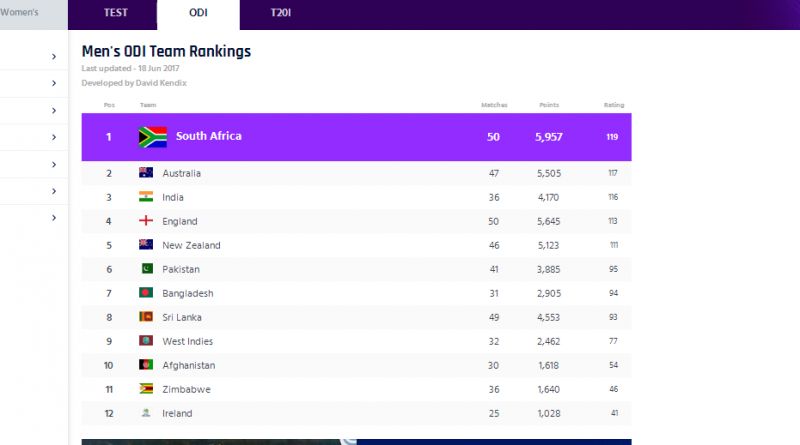 There were no other changes in the teams standings led by South Africa, although India, England and Bangladesh have all lost a point each. In the ODI player rankings, India opener Rohit Sharma, who scored 123 not out in the semifinal, has gained three

slots to reach 10th position while pace bowlers Bhuvneshwar Kumar (up four places to joint-19th) and Jasprit Bumrah (up 19 places to 24th) are the others to gain.

Pakistan pace bowler Hassan Ali and rookie opener Fakhar Zaman are among those to make huge gains. Hassan, named player of the tournament after finishing with 13 wickets, has gained 12 positions to reach seventh rank.

Mohammad Amir, who missed the semifinal due to a back spasm but picked three for 16 in the final, has gained 16 slots to reach 21st place while Junaid Khan has moved up nine places to 47th position.

Fakhar Zamans player of the match effort of 114 in the final and 57 in the semifinal has helped him break into the top 100 after just four ODIs as he has gained 58 positions after these two performances to reach 97th rank.

Babar Azam has reached a career-best fifth position after gaining three positions with scores of 46 in the final and 30 not out in the semifinal. Mohammad Hafeez has gained two slots to reach 20th rank while opener Azhar Ali has moved up 11 slots to 31st position.

Bangladesh captain Mashrafe Mortaza has gained three slots to reach 15th position among bowlers while opener Tamim Iqbal has moved to 16th position among batsmen, a gain of one rank after a continued good run which saw him score 70 against India in the semifinal and finish with 293 runs in the tournament.