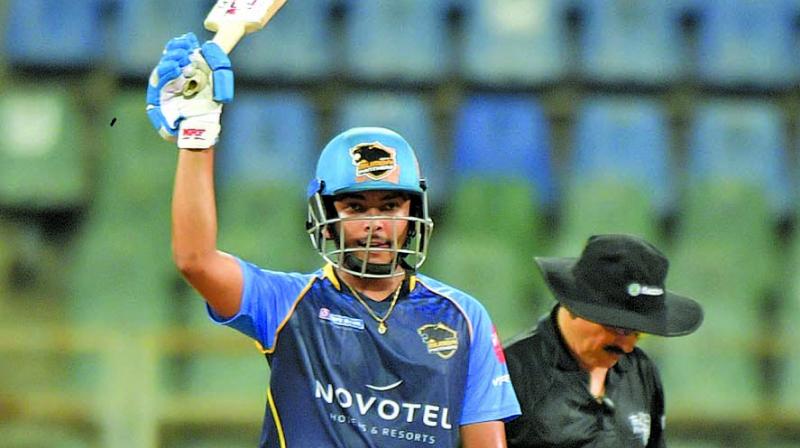 It was a clash between IPL franchise Delhi Capitals team-mates Prithvi Shaw and Shreyas Iyer in the T20 Mumbai League but it was the former who came up with match winning performance.

Shaw scored blazing half century to dominate in the opening stand of 84 runs with Vikrant Auti and then compensated for some sloppy catching by his team-mates by grabbing four catches himself in the field to star in North Mumbai Panthers 27-run win over Namo Bandra Blasters at the Wankhede Stadium.

Iyer was Shaw’s skipper in Capitals and together they made history by reaching the Qualifier 2 of IPL-12 before losing to Chennai Super Kings. But on Friday night, it was Shaw who took the charge after Iyer won the toss and asked Panthers to bat first.

The 19-year-old caused most of the carnage in powerplay overs that yielded 59 runs. He smashed seven boundaries and two sixes in his 31-ball knock. However, Sujit Nayak dismissed the dangerous Shaw shortly after his half-century.

Iyer brought himself on and dismissed Karan Nande cheaply. The wickets fell at regular intervals but Auti held fort by scoring half century. Tail enders added 31 runs off the final three to set a daunting target of 176 for Blasters.

In response, Blasters lost early wickets including Iyer and were never in the chase after being reduced to 21/4 in five overs. Seventh wicket partnership of 59 runs between Siddharth Chitnis (50) and Aditya Dhumal (38) though gave some respectability to their eventual score of 148/7. Dhumal had earlier picked two wickets as well.

“I am delighted to be a part of North Mumbai Panthers since its first edition. Growing from a team player to captain is a matter of great honour for me. Mumbai is home and the league is a huge opportunity for local talent to get noticed,” Shaw said ahead of the match and his team is currently at the top of table in Group A.

Late flourish from Azhar Ansari (17 in five balls) helped ARCS Andheri to come back from the brink of defeat to beat last year’s losing finalists Shivaji Park Lions. Opener Akhil Herwadkar was however the star of the victory as he paced the chase to perfection with an unbeaten 79 in 58 balls with nine boundaries and three sixes.

Raunaq Sharma’s unbeaten 51 of 31 balls which included assault in the death with three boundaries and four sixes, the Lions posted a fighting total of 159 for six. Herwadkar and Sufiyan Shaikh got off the blocks in a hurry in chase, and raced to 67 in the Powerplay.  However, the next seven overs saw the middle-order being pegged back by a spirited spin performance by the Lions. Having lost three wickets for 33 runs, ARCS required 60 runs off the last seven overs.

ARCS required 32 off 12 balls and left-handed duo of Ansari and Herwadkar crushed promising pacer Shivam Malhotra. With Malhotra erring in line and length, Ansari started off with a four and six before rotating the strike off the third ball. Herwadkar then took over and repeated the boundaries’ sequence to end the over with a couple.

As if the 23-run over hadn’t sealed the deal for ARCS, Ansari’s six off Shivam Dube off the first ball of the last over took all hopes of another late comeback by the Lions.