Mumbai Indians’ wicket keeper sustained a hit from the ball on the side of his right eye on Tuesday. 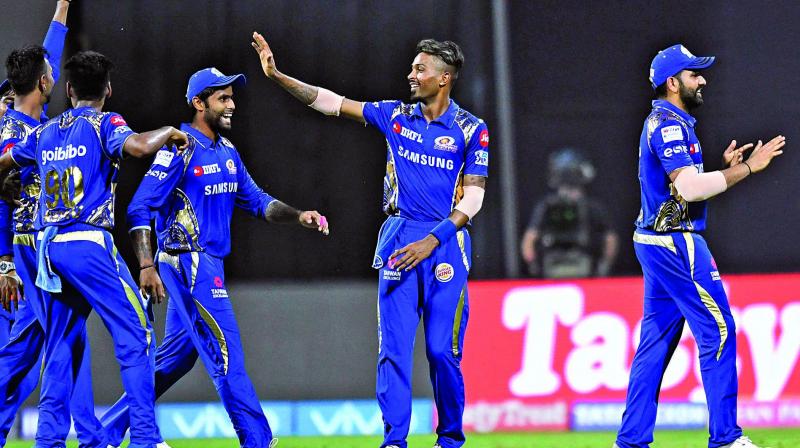 The medical staff may advise Kishan to put his feet up and cool his heels against Rajasthan Royals.(Photo: Rajesh Jadhav)

When Hardik Pandya throws the ball from deeper areas of the field, they generally land in the gloves of the wicket-keeper or the bowler on the other end. Be it Mumbai Indians or the national team, the Vadodra all-rounder’s fielding ability is always an asset to the team.

But what happened on Tuesday was not his blunder. While Mumbai was cruising against Royal Challengers Bangalore at Wankhede, a Pandya throw from mid-wicket in the 13th over bounced awkwardly on the pitch and went on to hit the keeper, Ishan Kishan on the side of his eye. The young custodian, who was not wearing a helmet, ran back in deep agony before going down. Sarafaraz Khan, who was completing the run, was the closest to Kishan. He dropped his bat on seeing the impact.

As soon as Pandya saw this, he ran from his position. A couple of anxious minutes and Pandya’s hands on the back of his head looked like Kishan might have taken a colossal blow. The medical team did not risk the situation and rushed him back to the dressing room. He left the field with a swelling on the side of his right eye.

Even though Mumbai were in the driving seat of the game, an injury to the promising top-order batsman could have moved the side up and down. However, skipper Rohit Sharma confirmed that the injury is not as serious and he would return in a couple of days.

“Unfortunately, I have not checked on him because after the presentation got over, I came here (to address the media),” he said. “He seems all-right, he has got a little swelling in his eyes, which should be ok by tomorrow or the day after, we play the next match on April 22. We have got 3-4 days, where we will assess the situation and hopefully he will be fine,” stated Rohit.

To avoid risk, the medical staff may advise Kishan to put his feet up and cool his heels (and eye) for the away game against Rajasthan Royals.

He did not have the best of days while batting as well, courtesy, a venomous in-swinger from Umesh Yadav, which sent Kishan back on a duck. However, the 19-year old Jharkhand batsman cannot be judged on this.

His prowess with the bat and the gloves attracted a final bid of INR 6.2 crores from the Neeta Ambani-owned team. And even in this season, if one bars out this innings, Kishan had provided the needed support.  So far, he has scored 93 runs in four games.

A major reason why he caught the fancy of Mumbai was his utility in the batting order. He is not an erratic youngster, who always goes after every ball that he faces. His exquisite knock of 273 runs against Delhi in the 2016-17 Ranji Trophy is one example of that. Kishan had a topsy-turvy season last year with Gujarat Lions but that was also a reflection of the team’s form.

Aditya Tare might play his first game of the season in Jaipur against RR. He has fond memories against the same opposition of the winning six that took MI to the playoffs in 2014. The Mumbai domestic team captain’s ability with the gloves may be superior to Kishan’s but he possibly cannot provide power to the batting line-up like him.

It will be interesting to see how Rohit and Mahela Jayewardene change the batting line-up without Kishan. Even Tare has stepped up for Mumbai this domestic season in the absence of openers and we could see him in the top-order for the franchise as well.