The lanky allrounder, who made a dream Ranji debut for Mumbai, earned Rs 5 crore in the players’ auction and has done well for Shivaji Park Lions. 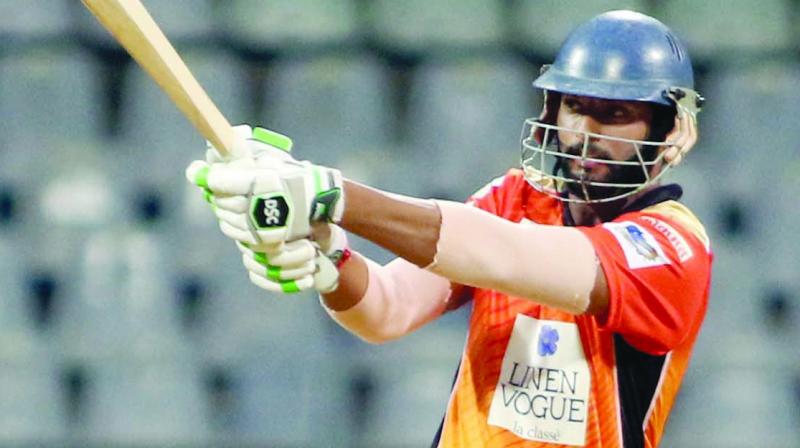 Shivam Dubey made his Twenty20 debut for Mumbai a couple of seasons ago, on the back of consistent performances in club cricket. The 24-year-old Andheri resident, who works with BPCL, earned a well-deserved List A debut for Mumbai in February, followed by a Ranji Trophy debut in December last year.

On his Ranji debut, he took a fifer and made 71 runs with the bat in the second innings against Karnakata, during the quarter-final in Nagpur. Unfortunately, it turned out be the last game for Mumbai in Ranji Trophy in 2017-18 season.

He then went on to represent Mumbai in the Syed Mushtaq Ali T20 trophy and the Vijay Hazare trophy. Later, he performed consistently for BPCL in the D.Y. Patil T20 Cup and it counted, as four franchises bid for him aggressively in the inaugural T20 Mumbai League players auction.

He was eventually picked by the Shivaji Park Lions (Mumbai South Central) for Rs 5 crore, becoming their most expensive player, even ahead of icon player Siddhesh Lad, who went for Rs 4 crore.

Shivam hasn’t disappointed his owners so far. The right-arm medium pacer has been miserly, and among the wickets, especially in the death overs, with his slower back of the hand deliveries foxing top batsmen. He has sizzled with the bat too when required. He took his first fifer of the tournament and then gave lift to the chase with a 23-ball 47 against the Mumbai North East Triumph Knights, to give Shivaji Park Lions the first win of the
tournament.

“I am more of a batting all rounder, but both the areas are important for me. Playing Ranji helped me, as there are matured players there and you learn good cricket. Though Mumbai cricketers can compete at any level, performing in the Ranji Trophy gave me confidence,” he said.

Dubey went unsold in the Indian Premier League (IPL) auction but he isn’t complaining. Had the T20 Mumbai league came before the IPL-auction as planned earlier, it would have been boon to him and other cricketers from Mumbai.

“It has been an interesting tournament so far, as we are winning and losing matches, which makes the League entertaining. This tournament will take every cricketer in Mumbai up, and that is very important, whenever it happens,” he added.

Shivam, who bats left-handed and hits sixes with ridiculous ease, revealed that power hitting comes natural to him and he still prefers to do knocking practice with his father, who has a garment business. “I work on my skills, but power-hitting comes natural to me. As a child, I used to play with our house-help and hit every ball on the road. He had to get it every time and would complain to my dad. From there, I started playing with my dad,” he said.  Despite coming at this level, he is hoping to earn an IPL contract, as well as getting to play for India someday “The target is to play for India when the opportunity comes, and till then keep performing and working hard,” he says.

Dubey feels T20 Mumbai League is very competitve. “Here we have Mumbai players playing each other. We know our  strengths and weakness, so it is difficult to bowl and play shots. In other tournaments like the D.Y. Patil T20 Cup, there are players from outside too, so you can surprise them,” he said.