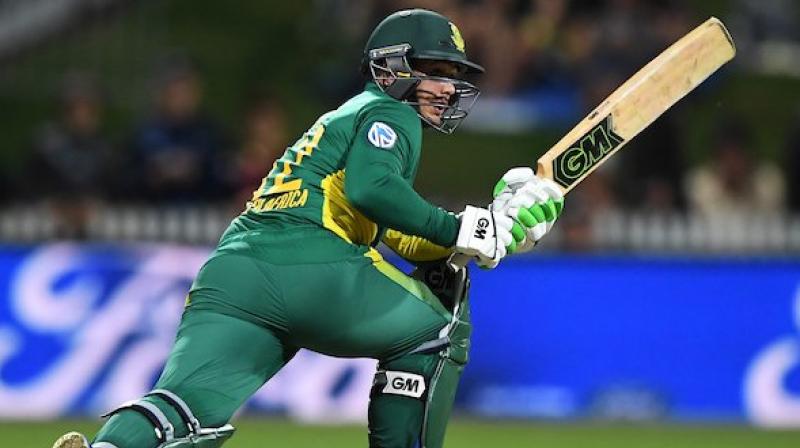 Hamilton: AB de Villiers and Andile Phehlukwayo kept calm amid a middle-order collapse to steer South Africa to a four-wicket win over New Zealand on the penultimate ball of Sunday's first one-day international and a record-equaling 12th straight ODI win.

De Villiers was at the crease when South Africa lost three wickets for one run in the space of six balls to see a comfortable cruise to victory transformed into a desperate struggle which ended when de Villiers hit a boundary for victory. South Africa ended on 210-6 in 33.5 overs in reply to New Zealand's 207-7.

Among those wickets to fall was Quinton de Kock whose 69 from 64 balls seemed to have set up South Africa for a comfortable win in the five-match series opener, which was reduced by rain to 34 overs per side.

De Kock had guided South Africa to 125-2 in the 22nd over but the home side rallied superbly to put the outcome of the match in the balance.

De Villiers lost a host of partners before he found in Phehlukwayo a man willing to stick with him at the death to equal South Africa's record of 12 straight ODI wins, set in 2005.

The pair shared an unbroken partnership of 54 for the seventh wicket, with de Villiers finishing on 37 from 34 balls and the nerveless Phehlukwayo 29 from 23. In a key decision, De Villiers saw no reason to shield Phehlukwayo from the strike in the vital final overs, allowing the 20-year-old in his 11th one-day international to take equal responsibility for the run chase.

Phehlukwayo struck a six from the third ball of the last over bowled by Tim Southee, which South Africa had begun needing 12 runs to win.

After a bye from the first ball, and a wide which was also a bye from the second, the match was still in the balance. But Phehlukwayo's massive drive down the ground off the back foot from the third ball left South Africa needing three runs from four balls.

There was a dot ball, then a single, before de Villiers drove the fifth ball to the mid-off boundary to lift South Africa to victory.

It was a massive effort on a pitch which had sweated under the covers through almost two days of rain and which was soft and tacky when the match began. South Africa won an important toss, sent New Zealand in and Chris Morris took 4-62 as South Africa held the home side to a total it felt it could challenge.

Morris had 4-29 from his first six overs but his figures were bruised when Colin de Grandhomme and Southee - active at the end of both innings - took 25 runs from his last over in a partnership of 51 from 23 balls which almost made New Zealand's total defensible. Kane Williamson earlier hit 59.

South Africa was well on track when de Kock combined with Hashim Amla (35) in an 88-run partnership for the opening wicket. But New Zealand again showed resilience as it ran quickly through the South African middle order with Southee dismissing J.P. Duminy and Farhaan Behardien with consecutive deliveries.

South Africa slipped from 125-2 to 126-5 and needed all of de Villiers' steely resolve to rebuild its innings and achieve the win.

Batting conditions were immensely difficult. The pitch was slow and holding and turned prodigiously so that the New Zealand seam bowlers reverted to the use of almost unplayable offspinners and off cutters which held up and turned sharply.

"It was a fantastic game of cricket but it was pretty tough out there," de Villiers said. "I thought we adapted very well.

New Zealand fell just short of a competitive total. After Williamson's half century from 48 balls, its best efforts came from Dean Brownlie (31) and James Neesham (29) before de Grandhomme and Southee boosted the total.

The platform set by de Kock and Amla was vital to South Africa's reply, allowing it to weather the middle-order collapse which preceded de Villiers' match-winning stand.

"It's a bit of a shame really," New Zealand captain Williamson said. "We got ourselves into a winning position but credit to the way South Africa played ... They got off to a good start which made chasing that total down a lot easier."