A new cricket book is out this season and it is full of the anecdotal brilliance of India’s cricketers, past and present. 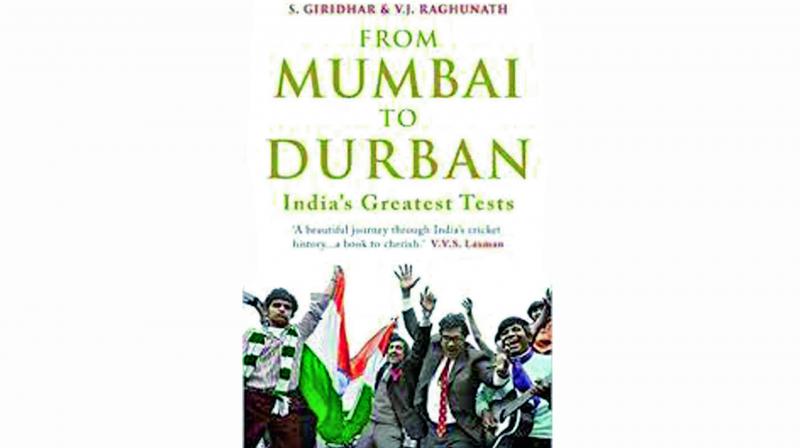 The cover of a recently-launched book From Mumbai to Durban: India’s greatest Tests.

These are interesting times in cricket. There is no BCCI worth the name as all its ‘honorary’ officials have been banished. And yet Team India plays on as if it has not a care in the world. This puts paid to the former BCCI prez theory that judges need good luck to administer the game. Well, all they need is good sense and they have a lot of that. In fact, the new all-formats skipper is not only filled with common sense but also an extraordinary sense of aggression at the batting crease, which was most apparent in the double hundred stand he shared with Kedar Jadhav through which India made history in the chase again.

Talking of history, a new cricket book is out this season and it is full of the anecdotal brilliance of India’s cricketers, past and present. There has, of course, been much progress in Indian cricket since the early days when a player’s catching ability was switched on or off depending on whether he and the bowler were friends or not. The appointment a couple of weeks ago of a unitary skipper again for all three formats also helps change the perspective considerably from those early days when undermining captain was the name of the game in Indian cricket.

The cricket enthusiasts, S. Giridhar and V.J. Raghunath, recount sharply the divisions of yesteryear in recalling India’s most famous Tests in their hardbound tome, From Mumbai to Durban: India’s greatest Tests. “The worst of it was the intrigue over the selection of both players and captain. The administration of the game, from the beginning, was always in the hands of self-important men who treated players shabbily...” The authors speak illustratively of the omission of Vino Mankad from the England tour of 1952 and how they latched on to him after shamelessly asking him to join the tour midway.

“The Indian team had as many as 12 captains for 90 Tests, the nadir was the home series in 1958-59 against West Indies, when India had four captains for five Tests. It was unedifying,” they write and quite rightly too. In its infancy, Indian cricket invited intrigue like a magnet. And not until ‘Tiger’ Pataudi ascended to the helm (in tragic circumstances it may be recalled) and then set about picking a national team that the concept of Team India was born. He was the fearless one who spoke on an equal plane with the administrators. Once when DDCA’s R.P. Mehra was to manage a team of colts to Pakistan, Tiger said he was hoping the Pakistanis would keep Mehra there.

As irony would have it, most success came Team India’s way after Tiger was unseated by Vijay Merchant with his famous chairman’s casting vote, which he had engineered by keeping one of the selectors away from the meeting thus creating a tie in the first place. But before then, Tiger did lead India to its first overseas Test series win in New Zealand in 1968-69, a fact that usually gets buried in Indian cricket because of the effervescence of the series triumphs of 1970-71. Pataudi’s team, thrashed 4-0 in Australia, rose from those lows to win on green and soft wickets of New Zealand.

The twin series wins in the Caribbean and in England, coming virtually back-to-back, changed the face of Indian cricket even as the ubiquitous Japanese transistor radio sold like hot cakes at that time in the country when the AIR running commentary was the only link for Indian cricket fans when it came to cricket being played abroad. Coming through the air waves, the descriptions assumed a magical air as India flexed her cricket muscle. There may have been much hyperbole on the air, but it was all enjoyable stuff as TV was unknown in India until the b/w sets began popping up in the mid-70’s.

The book captures the best moments of India’s most famous Test match wins from the 50’s, reading better and better as we enter the more modern era. The authors’ interactions with the greats has helped bring a nice perspective to the interesting tale of Indian cricket, which is as much about its colourful personalities as it is of wins and losses. The changing face of Indian cricket, with the savvy modern cricketer the norm rather than the exception, is also nicely brought out in the 28 Test match victories rated as the most memorable. Test cricket being a reflective game, gives more time than the slam-bang limited-overs action-packed cricket for reflection.

It is a bit like the contrast between watching Casablanca and Fast & Furious. There is much to be said of both and blessed is he who can enjoy both genres. But you get the feeling that the better books are written about Test match cricket, which is made pretty obvious by another excellent effort at playing the raconteurs of Indian cricket by the authors Girish and Raghu. This is a book well worth buying and preserving among the great many special ones that the game has spawned.