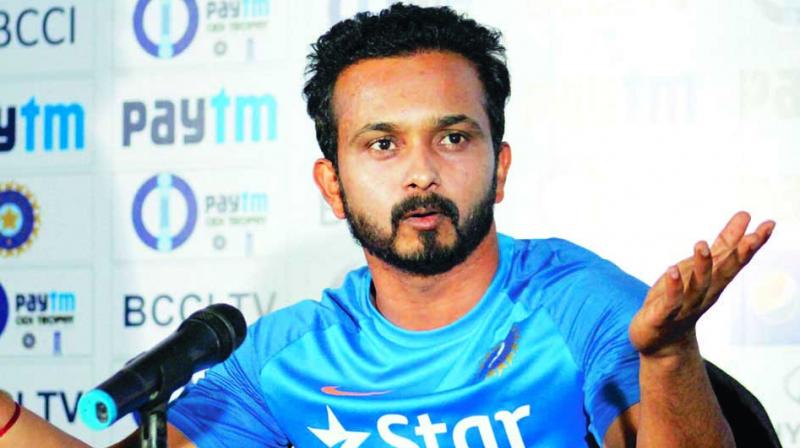 Cuttack: Pint-sized Kedar Jadhav’s power-packed 65-ball-100 might have earned him the sobriquet of ‘Pocket Dynamite’ but former national selector Surendra Bhave did reveal how a hard-core vegetarian added power to his small frame once he started having chicken.

Son of former Maharashtra State Electricity Board employee Mahadev Jadhav, Kedar hails from a vegetarian family. “You can surely give this credit to me. It was me who made him eat chicken,” laughed Bhave. “I don’t want to take credit for his stardom. I am like his coach, elder brother, mentor and guide, who meet on an off or exchange a few texts. The last time (in 2010-11) I told him that his backlift looked astray and he immediately corrected it resulting in an amazing transformation,” said Bhave, who himself was a Maharashtra stalwart during his playing days said.

He fondly recollected the first time he saw a young Kedar during a Cooch Behar Trophy game against Kerala where he blasted 195 from 262 balls at the Nehru Stadium. “I instantly knew he was special. With the kind of ease he was hitting the Kerala bowlers was really different. His body language always looks casual but he’s someone who loves to take on the opposition and finish the match,” Bhave said.

Bhave feels that Kedar is an all-format player, who can keep wickets better than a lot of specialist keeper. “I’ve little doubts that he is an all format player. I’ve seen some of his best knocks in multiday cricket. He can bowl, give breakthroughs and his wicket-keeping is better than any specialist,” said Bhave.