Isuru was playing in Mzansi Super League final when a young girl displayed a placard which read: "MARRY ME UDANA'. 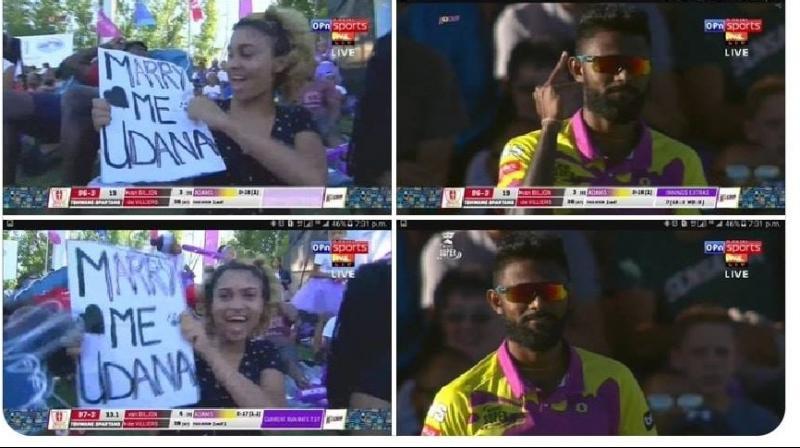 Sri Lanka's 32-year-old all-rounder Isuru Udana was openly proposed by a girl in South Africa to marry her. (Photo:File)

Dubai: Sri Lanka's 32-year-old all-rounder Isuru Udana was openly proposed by a girl in South Africa to marry her.

Udana, who has been married to Pereen Perera (on December 14, 2015, Sri Lanka's only World Cup-winning (1996) captain Arjuna Ranatunga was a witness signatory) could not accept the proposal and he rightly showed his ring finger, suggesting "I am married".

"Isuru’s great work ethic and passionate displays on the field has helped make him a favourite with local fans. Even our local crowd in Paarl had one of their favourite chants linked to him when they sang “Dala Udana, Dala” which means in Zulu “Do what you must”, Jannie Momberg, the Paarl Rocks Media and Marketing Manager speaking exclusively over telephone from SA, said.

"He played a great part in the Paarl Rocks winning the 2019 Mzansi Super League. He contributed with bat and ball throughout the tournament, but it was his brilliant bowling in the final where he finished off with 2/24 which helped us win our maiden MSLT20 trophy", he further added.

Udana is not the first cricketer who has been openly proposed.