Maybe I could bowl like Mohammed Shami: Abu Jayed

Jayed's biggest achievement in the match was getting the wicket of India skipper Virat Kohli which he termed as a 'dream come true'. 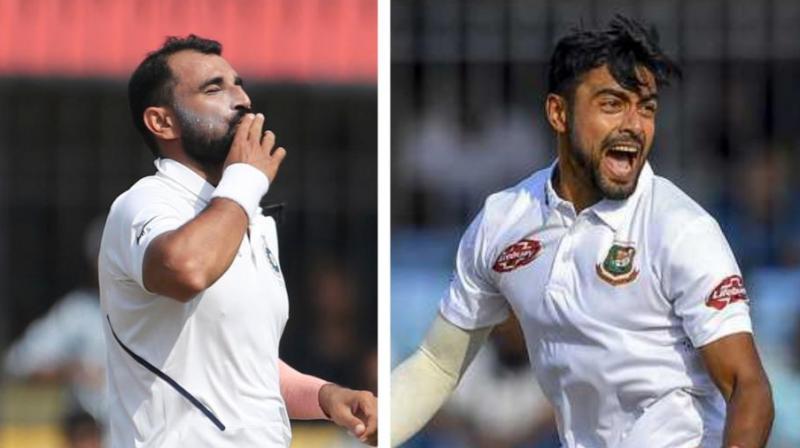 Bangladesh pacer Abu Jayed is aiming to bowl like Mohammed Shami, whose heroics helped India defeat the former's side in the first Test match. (Photo:AP/AFP)

Dubai: Bangladesh pacer Abu Jayed is aiming to bowl like Mohammed Shami, whose heroics helped India defeat the former's side in the first Test match.

"I spoke with [Mohammad] Shami bhai yesterday [Saturday]. There are some similarities between him and me since we both use the seam. I have seen him bowl a lot of times and I paid extra attention to how he was bowling. I have compared his height to mine to find out if he is taller than me or of equal height. Then I figured maybe I could bowl like him," International Cricket Council (ICC) quoted Jayed as saying.

India thrashed Bangladesh by an innings and 130 runs to gain a 1-0 lead in the two-match Test series. Shami had picked seven wickets in both the innings combined.

In the batting department, Mayank Agarwal played brilliantly as he played a knock of 243 runs. Agarwal was dropped early in his innings but Jayed said he does not 'bother about missed chances'.

"It's not frustrating; I don't bother about missed chances too much. I believe it's part of cricket. I do accept that catches are supposed to be held on to but one can't change the past by thinking about it. If I keep thinking about the missed chances it will affect me adversely," he said.

Jayed's biggest achievement in the match was getting the wicket of India skipper Virat Kohli which he termed as a 'dream come true'.

"That's why I try to create more chances at times like these because they might take those ones. For example, Saif took a great catch which dismissed Pujara, it is also a part of cricket. It was an amazing feeling to dismiss the two best batsmen of our times. Getting Virat Kohli's wicket was like a dream come true," Jayed said.

Jayed is now gearing up for the day-night Test which is scheduled to start from November 22.

"Today we have a practice session, after bowling with it I will understand the difference. I will discuss about our strategy [with the pink ball] with my coaches. As the ball is a new one, we also need to measure the amount of movement the ball gives off. I should also get a hold of the amount of swing that is on offer," he said.