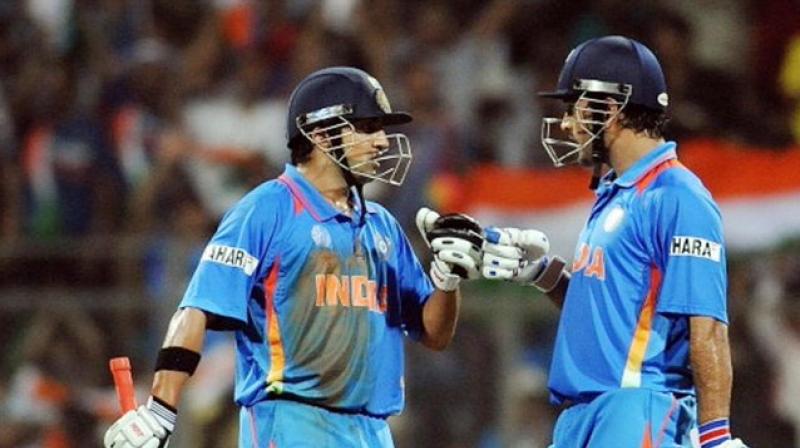 For quite some time, Gautam Gambhir has been slamming the former Indian skipper, Mahendra Singh Dhoni for his decisions, which cost the former Indian cricketer his place in the Indian squad. After lambasting the 2011 World Cup winning captain for his rotation policy, the BJP MP now has come out with a new revelation, stating that the veteran wicket-keeper batsman intentionally told him to go after his personal milestone, so that the left-hander batsman fails to reach the landmark. (Photo:Twitter)

Mumbai: After Mahendra Singh Dhoni hit Nuwan Kulasekara’s delivery for a six over the long-on, 1.2 billion Indian fans stood still, and cried tears of joy, as India lifted the World Cup trophy in 2011, after a gap of 28 years. India’s second World Cup glory made Dhoni a world class leader and captain.

The 2011-World Cup winning captain delivered India their second title, after capturing the inaugural 2007 World T20 title. However, during the 2007 T20 and 2011 limited-overs finals, one thing remained same – Gautam Gambhir scored in both. Gambhir scored 75 in the T20 final, and 97 in the 50-overs World Cup final. Apart from Gambhir’s performance, the other thing that did not change was the man of the match.

Despite performing so well in both the finals, Gambhir was eluded by the Man of the match (MoM) award during both the finals. In the 2007 final, Irfan Pathan won the MoM for his 3/16. While in 2011, Dhoni won the award for his calm and cool knock of 91*.

Nevertheless, for quite some time, Gambhir has been slamming the former Indian skipper for his decisions, which cost the former Indian cricketer his place in the Indian squad. After lambasting the 2011 World Cup winning captain for his rotation policy, the BJP MP now has come out with a new revelation, stating that the veteran wicket-keeper batsman intentionally told him to go after his personal milestone, so that the left-handed batsman fails to reach the landmark.

Just a few days back, Gautam Gambhir stated that MS Dhoni’s “crap” rotation system was first introduced in the 2012 CB series in Australia, and since the policy was implemented, India’s legendary players like Sachin Tendulkar, Virender Sehwag and Gautam Gambhir were dropped alternatively in the opening slot.

However, this time, the retired player has revealed how MS Dhoni’s advice had cost him his century in the 2011 World Cup final. During an interview with The Week, Gambhir stated, “I tell every youngster and every person that before getting to 97, I never thought about my own individual score but looked at the target set by Sri Lanka. I remember that when an over was completed, I and Dhoni were at the crease. He told me that ‘these three runs are remaining, get these three runs and your hundred would be completed.”

Gambhir then described that if Dhoni hadn’t asked him to go after his personal record, he would have easily scored the century. After Dhoni’s advice, the cricketer played a shot out of impetuosity, which resulted in his dismissal. Gambhir then got bowled by Thisara Perera on 97.

Gambhir stated, “That’s why… till I was on 97, I was in the present, but as soon as I thought, I am three runs away from getting a hundred, then that rush of blood caused by the desire to get to a hundred (took over). That’s why it’s so important to remain in the present… when I was walking back to the dressing room after being dismissed, I said to myself that these three runs would trouble me for the rest of my life and that is true. Even to this day, people ask me why I couldn’t get those three runs.”