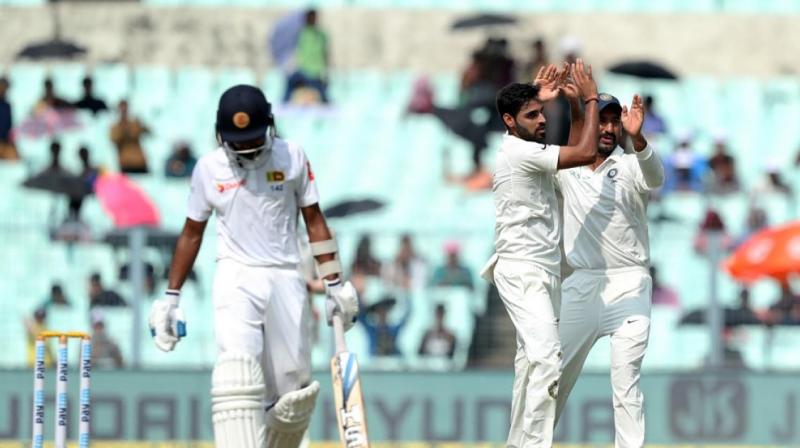 Kolkata: Sri Lanka posted a total of 165-4 on Day 3 of the ongoing first Test against India on Saturday, trailing the hosts by seven runs.

Earlier, India started the day at 74-5. Cheteshwar Pujara’s 52 was the main highlight of the Indian innings.

This was followed by a 99-run partnership between Angelo Mathews and Lahiru Thirimanne, after which the latter departed for 51.

Angelo Mathews, too, departed for 52 as India found their way back to the match.

However, just minutes before the actual close of play, bad light halted the game, and soon it was stumps on Day 3.

WICKET!Angelo Mathews has departed for 52 as Umesh Yadav has strruck once again. KL Rahul takes the catch to complete the dismissal.

WICKET! Umesh Yadav has provided India the breakthrough, as he removes Lahiru Thirimanne for 51, while Kohli takes a catch at second slip.

An unbeaten 67-run partnership between Angelo Mathews and Lahiru Thirimanne so far has helped Sri Lanka bring up their 100.

Sri Lanka have recovered well after the early blow, as they trail by less than 100 runs. Virat Kohli has experimented with seamers only- Bhuvneshwar Kumar, Umesh Yadav and Mohammed Shami. He is yet to introduce a spinner.

WICKET! Bhuvneshwar Kumar strikes as he removes Dimuth Karunaratne, who departs for eight runs. India get the crucial breakthrough.

Openers Dimuth Karunaratne and Sadeera Samarawickrama have got the visitors off to a strong start, scoring eight runs in the first over.

Kolkata: Sri Lanka bowled out India for 172 in the ongoing third Day of the first Test here at the Eden Gardens on Saturday. After having elected to bowl, Sri Lanka troubled India right from the start, and never gave the hosts room for improvement.

For India, Cheteshwar Pujara was the highlight, having scored a well-played 52. Once he departed, Wriddhiman Saha (29) and Ravindra Jadeja (22) put up a 48-run partnership after which the latter departed.

The Indian top order failed to contribute as KL Rahul, Shikhar Dhawan and Virat Kohli went out without scoring much.

For Sri Lanka, Suranga Lakmal was the star with the ball, having finished with a spell of 4-26. Lahiru Gamage, Dasun Shanaka and Dilruwan Perera also took two wickets each.

India will hope to restrict the visitors to as much as possible when the Lankans come out to bat.

WICKET! Suranga Lakmal gets another wicket as he removes Bhuvneshwar Kumar, courtesy a catch by Niroshan Dickwella.

WICKET! Wriddhiman Saha has departed for 29, as Sri Lanka inch closer to bowling out the hosts. Two wickets in the over for Dilruwan Perera

WICKET! Jadeja has departed for 22 runs as Dilruwan Perera has got his wicket.

WICKET! Dangerman Cheteshwar Pujara has departed after a well-played 52, as Lahiru Gamage bowls him out.

FIFTY! Cheteshwar Pujara has got to his 16th Test fifty, thanks to a calm and composed innings.

Kolkata: Hosts India and visitors Sri Lanka will hope that the rain stays way at Eden Gardens here on Saturday, as both the teams head to Day 3 of the first Test. Both Day 1 and Day 2 were marred by heaving rains, causing the play to stop quite early.

On Thursday, Sri Lanka got to a flying start, as Suranga Lakmal dismissed KL Rahul, Shikhar Dhawan and captain Virat Kohli in a day when just 11.5 overs were bowled.

However, India continued to suffer blows as they lost Ajinkya Rahane and Ravichandran Ashwin on Day 2 as Dasun Shanaka got two wickets.

At stumps on Day 2, the hosts finished at 74-5, with Cheteshwar Pujara batting at 47, while Wriddhiman Saha is on the other end, having scored six runs so far.

Given that rain does not spoil the game again, India will hope to turn things around and make a comeback, having already lost half their side.