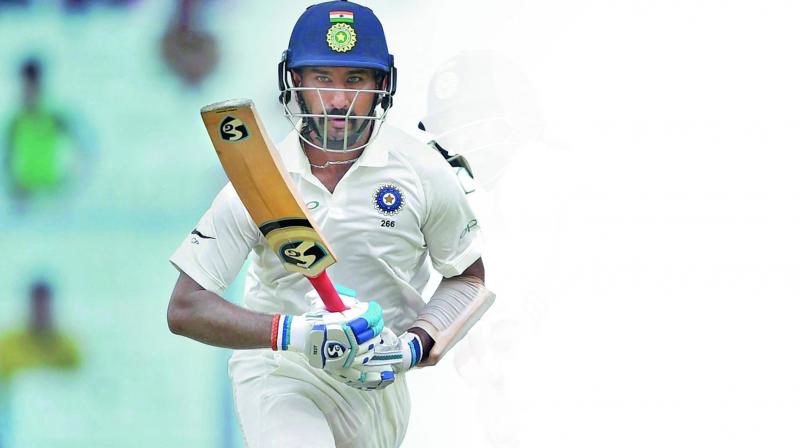 India batsman Cheteshwar Pujara in action during the second day of the first Test against Sri Lanka at Eden Gardens in Kolkata. (Photo: PTI)

After Suranga Lakmal’s (3/5) exploits on the first day of the rain-affected series opener, it was Shanaka’s turn to steal the limelight on Friday as he removed Ajinkya Rahane (4) and Ravichandran Ashwin (4) to return with impressive figures of 2/23.

Pujara was the lone Indian batsmen to produce some fight against the Sri Lankan bowling attack on a green top in overcast conditions.

Pujara displayed impeccable defensive technique again and struck only the errant deliveries to score during his unbeaten 47-run knock.

Shanaka took both the wickets in the morning but Pujara anchored India’s first innings on testing overcast conditions at the Eden Gardens.

Coming in to bat at the score of eight, Pujara faced 102 deliveries and struck nine fours in his knock, three runs away from what could be a memorable half-century as the India no. 3 built his innings with supreme resolve.

He patiently waited for loose balls as the visitors got maximum purchase from the Eden’s green top, brilliantly aided by the overcast conditions.

Shanaka struck in his third over when he tempted Rahane for a drive and got a thin edge to the wicketkeeper. Next he evicted Ashwin after setting him up brilliantly as Pujara struggled to get a partnership going.

Overnight 17/3 after Lakmal’s sensational bowling display, Indians were tested in the off-stump corridor by the Lankan pacer’s probing length and bounce.

Indians preferred to take Lakmal with extreme caution as the Lankan new-ball bowler finally ended his overnight spell from the High Court end for 11-9-5-3. On 24, Pujara was hit on his bottom hand — bowling hand — thumb by a rising short pitched delivery from Lahiru Gamage as he flung his gloves in pain in the 25th over.

In the next over, Pujara lost Ashwin as Shanaka set him up with a bouncer and followed it with a good length delivery that was cut straight to point by the  off-spinner.

But Pujara remained unperturbed and looked for loose deliveries and scored mainly through boundaries before the first session was halted by rain.

Lunch was taken 10 minutes ahead of schedule while it started pouring in the middle. The heavens continued to pour, which meant no play was possible after lunch forcing the umpires to call off day’s proceedings.