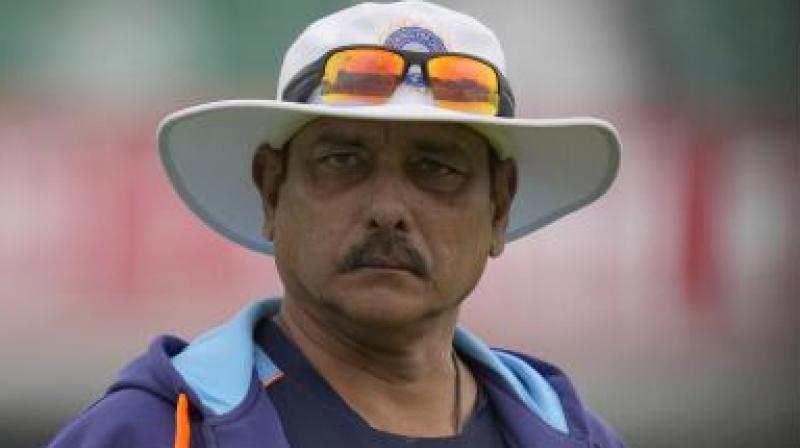 London: India head coach Ravi Shastri says he has no regrets about organising the book launch, which was widely perceived to be the reason for a COVID-19 outbreak that forced the cancellation of the fifth Test against England in Manchester.

Shastri, fielding coach R Sridhar, bowling coach Bharath Arun and physio Nitin Patel were found infected during the Oval Test and when junior physio Yogesh Parmar's test came positive ahead of the fifth Test in Manchester, the game was controversially called off with India leading the series 2-1.

There were reports of people not wearing masks at the event.

"I have absolutely no regrets because the people I met at that function were fabulous. And it was good for the boys to get out and meet different people rather than constantly being in their rooms," said Shastri in an interview to 'The Guardian'.

"At the Oval Test, you were climbing stairs used by 5,000 people. So to point a finger at a book launch?" he asked.

"...but I wasn't worried because incubation probably takes weeks. There were about 250 people there and no-one got COVID from that party."

Talking about his time in isolation, Shastri said: "It was funny because in my 10 days, I didn't have a single symptom barring a little sore throat. I never had any temperature and my oxygen level was 99 per cent all the time.

"I didn't take any medication through 10 days of my isolation, not a single paracetamol. I tell the guys: 'Once you're double jabbed, it's a bloody 10-day flu. That's it'."

The book launch got even more attention after the fifth Test was cancelled with the outcome of the series yet to be decided.

Asked if he was made the scapegoat in the aftermath of the abandoned Test, Shastri said the truth was otherwise.

"I've not got it at my book launch because it was on the 31st (August) and I tested positive on 3 September. It can't happen in three days. I think I got it in Leeds. England opened up on 19 July and suddenly the hotels were back, lifts were back. No restrictions."

Shastri said he wasn't involved in the decision to not play the Manchester Test while he was isolating in London. He also didn't discuss the matter with the players.

"No. I didn't know who had got it. I didn't know (the junior physio) got it suddenly and tested positive. He physically treated five or six players. I think that's where the issue started. We were aware that the incubation period meant that someone might get it in the middle (of the Test).

"A lot of players had their families there. So it became a situation where you don't know what that player is thinking. He's got a young kid, you know, he's got to think of them. It was a little, I would say, touchy.

Shastri is also confident that BCCI and ECB will settle the outcome of the series amicably.

"The ECB have been outstanding and their relationship with Indian cricket is tremendous. People are talking about the money but I can guarantee the ECB will make that entire amount with interest.

"I don't know if it's a stand-alone Test next year or they give them an extra two T20 games, but the ECB will not lose a penny because of the relationship that exists. In 2008 when we had the (terrorist) blast in Mumbai, England came back and played the Test. We don't forget that."

Bilateral T20s should be reduced, look at football

"I would like to see less and less bilateral T20 cricket. Look at football. You have the Premier League, the Spanish league, the Italian league, the German league. They all come together (for the Champions League). There are few bilateral football (friendlies) now.

"The national teams only play for the World Cup or World Cup qualifying (and other major tournaments like the European Championships, Copa America and the Africa Cup of Nations)."

He said skipper Virat Kohli and other India players also share his view on the subject.

"They all believe the same. There is enough franchise cricket. That is working. But what is the point of bilateral? In my seven years with this Indian team I don't remember one white-ball game. If you win a World Cup final you will remember it and that's the only thing left for me as a coach.

"I don't remember a single (white-ball) game. Test matches? I remember every ball. Everything. But the volume is too much. We beat Australia 3-0 in the T20 series. We beat New Zealand 5-0 in New Zealand. Who cares? But beating Australia in two Test series in Australia? Winning Tests in England? I remember that."

The cricket boards like to stage white-ball games as it generates more revenue but Shastri feels the right balance can be maintained.

"Money is important because it can be put into the grassroots. The top players still want to play Test match cricket but, barring England and Australia, very few countries make money through it.

"In India it's beginning to pick up because of the way India play. We go for the win because Test cricket is the ultimate," added Shastri.