Brathwaite’s tour may be over but he is not making an immediate return to the Caribbean. 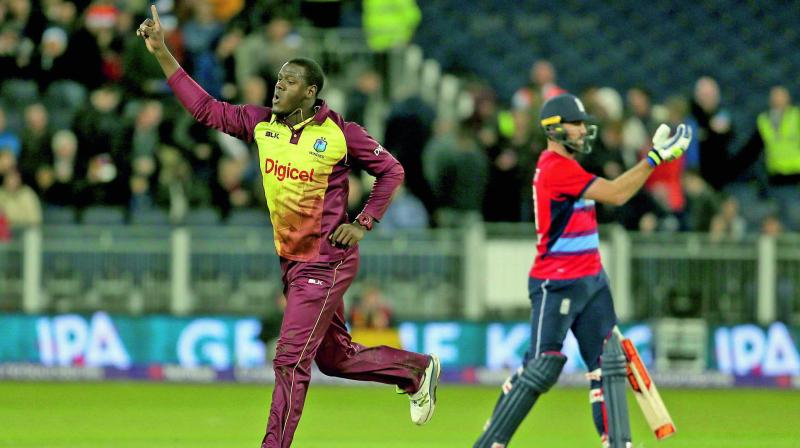 Carlos Brathwaite of the West Indies celebrates after dismissing England’s Liam Plunkett in the one-off T20 match at the Emirates Riverside Stadium in Durham, England on Saturday. (Photo: AP)

Chester-Le-Street: West Indies captain Carlos Brathwaite was rewarded for making an 8,000-mile round trip to Chester-le-Street as the tourists beat England by 21 runs in a lone Twenty20 international on Saturday.

England, set 177 for victory, were bowled out for 155 at a chilly and rainswept Riverside. Barbados-born Brathwaite, 29, had been West Indies’ star with the bat when they beat England in last year’s World Twenty20 final, hitting four successive sixes in a dramatic last over.

This time, paceman Brathwaite damaged England with the ball when, in his only match of the tour — he was not selected for the Test or one-day international legs — he took 3/20 in 3.3 overs.“ This was probably the more challenging of our recent wins,” Brathwaite told Sky Sports.

“Conditions were soft and slippery, the umpires were close to calling it off actually. It was so bad and I asked the guys if they want to trudge on or call it a day.

“The umpires were in agreement with us but then we thought we will give it a go and see if there are any slips, and there weren’t.”  Brathwaite’s tour may be over but he is not making an immediate return to the Caribbean.

“I am now heading off to Manchester to support the Red Devils (Manchester United) against Everton tomorrow (Sunday),” he explained.  The first ball of England’s reply saw Jason Roy caught at backward point by a diving Evin Lewis after he sliced a drive off Jerome Taylor.

Alex Hales was almost out for a golden duck as well but Rovman Powell dropped a tough diving chance following a firm clip off the pads. Brathwaite, however, bowled Hales for 43 made off just 17 balls, including eight fours and a six.

‘Losing the game’
Hales’s exit was the start of a slump that saw England lose three wickets for four runs as 64/1 soon became 68/4. Brathwaite caught England Test skipper Joe Root (17) on the drive off Ashley Nurse.

And Nurse’s fellow spinner Sunil Narine then had Twenty20 skipper Eoin Morgan out for just two when the dangerman reverse swept straight to Lewis at short third man. “Losing the game was losing three wickets in that period,” said Morgan.

Narine was named man-of-the-match after taking 2/15, with none of the West Indies side on show Saturday having featured in a preceding 2-1 Test series defeat by England. The hosts needed 26 off the last over and Brathwaite, fittingly, ended the match when he bowled Liam Plunkett.

Earlier, West Indies made 176/9. Chris Gayle (40) and Lewis (51) got West Indies off to a flying start, putting on 77 for the first wicket after Morgan won the toss.

But fast bowler Plunkett (three for 27) and leg-spinner Adil Rashid, whose figures of three for 25 were his best at this level, kept West Indies to under 200.

The third over saw Gayle smash left-arm paceman Willey for two successive sixes — a pull followed by a straight drive. Lewis got into gear in the sixth over as he hit 16 runs in three balls off Tom Curran.

Gayle’s 21-ball innings, featuring three fours and four sixes ended when, after guiding Plunkett to backward point, he was run out as he ambled for a single.

The 37-year-old Gayle, in common with several senior West Indies players, had been involved in a bitter dispute with Caribbean cricket chiefs.  But July saw him return to West Indies duty in a Twenty20 international against India in Kingston.

That match saw fellow left-hander Lewis make a stunning 125 not out. Lewis threatened another big score on Saturday while making fifty off 26 balls, including six fours and three sixes The Trinidadian, however, was out soon afterwards when he drove Plunkett to Root at mid-off.