Sri Lanka’s spin king Muttiah Muralitharan has also joined the group to debate on whether the World Cup trophy should have been shared. 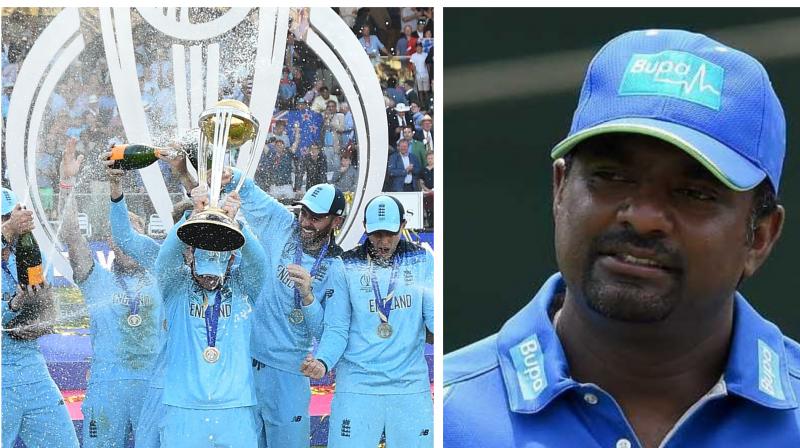 Muttiah Muralitharan also shared his views on ICC’s boundary-count rule and the overthrow that changed the fortunes of the game. (Photo: AFP)

Mumbai: Sri Lanka’s spin king Muttiah Muralitharan has also joined the group to debate on whether the World Cup trophy should have been shared or not. Speaking on the same, the leading wicket-taker in Test and ODIs, has said that the trophy should have been shared because there was no real winner regardless of who scored the most in the super-over.

In an interview with Cricinfo, Muralitharan said, "They should have been joint champions because that would have been reflective of the real battle between both teams." "Both teams did well, and at the end of the day, nobody got the winning run."

Stretching his argument further, the spin maestro said, "See, you should consider who is the best on the day, but you couldn't split it out because both were better, so what can you do?"

Murali also shared his views on ICC’s boundary-count rule and the overthrow that changed the fortunes of the game. On the boundary-count rule Murali stated, "You'd have to see if there's some other way to get the result. At the end of the day at this World Cup final, no-one scored a winning run... that's what people expect. So maybe a few changes might happen."

While on the controversial umpiring decisions which resulted in 6-runs overthrow, Murali emphasized, "maybe the unfortunate incident where the ball ricocheted off the bat and went for four, that law should be changed - maybe dead ball or something."

However, when such changes occur, the leg spinner opined, "It might be that happens in a few years, because everyone has to experience the thing, and then seek out the solutions."