Not every bowler can master yorkers: Glenn McGrath

Harris, who has had a seamless transformation from player to coach since his retirement in 2015. 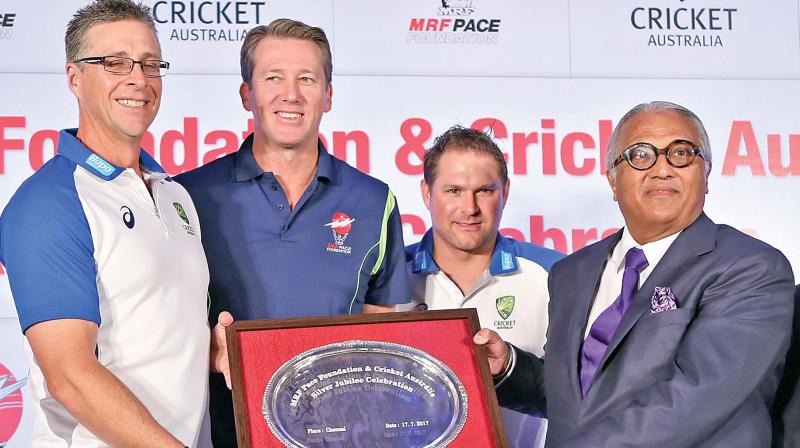 Chennai: Glenn McGrath was part of the first batch of trainees to visit Chennai when MRF Pace Foundation signed an agreement with Cricket Australia 25 years ago. Now, the legendary bowler is the director of the academy as MRF and CA celebrated their association’s silver jubilee on Monday.

Apart from McGrath, the most successful fast bowler in Test cricket, Mitchell Johnson, Josh Hazlewood, Zaheer Khan and Brett Lee are some of the trainees who made it big from the MRF stable.

McGrath said the coaching methods at the pace foundation has been evolving with time. “Technology plays a big role in training. Analysing the videos of bowling action in those days was time consuming. Now with the advent of high definition cameras, it has become a lot easier,” he added.

The Australian said there is so much demand for a bowler who is capable of unleashing yorkers consistently and improving this aspect is one of the focus areas of the academy. “Most people can bowl good length but a few can bowl yorkers on a consistent basis. If you can get the yorker right, you can be lethal in all formats,” said McGrath adding that his trainee Badil Thampi was impressive in the last IPL.

“To have all four is fantastic for Australian cricket. England are probably still up there owing to the two warhorses — James Anderson and Stuart Broad. For me, Cummins, in particular, stands out. We all know about Starc and Hazlewood. The way Hazlewood bowled against India after coming back from a lengthy lay-off was brilliant. It’s just so easy for him to bowl fast,” he said.

Harris, who has had a seamless transformation from player to coach since his retirement in 2015, said the current Aussie skipper Steve Smith has been leading from the front. “His batting has become even better since he became captain. I think he learned a lot from Michael Clarke. Despite having all the responsibilities, he hasn’t changed his approach. He seems to thrive on the extra pressure and it’s great to see him play the way he has been playing,” he added.