Sports   Cricket  18 Jun 2019  'Virat Kohli on his way to being hailed as greatest of all time': Ranveer Singh
Sports, Cricket

'Virat Kohli on his way to being hailed as greatest of all time': Ranveer Singh

Ranveer, who attended the game at Old Trafford, said he is impressed the way Kohli had evolved as a player. 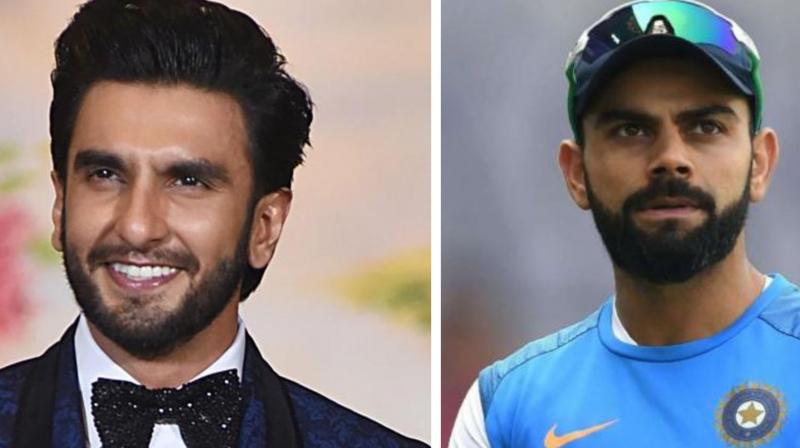 Kohli-led India thrashed Pakistan by 89 runs in the June 16 in Manchester. (Photo: AFP)

London: Ranveer Singh is all praise for Virat Kohli after the Indian cricket captain led the Men in Blue towards victory in the match against Pakistan in the ongoing ICC World Cup 2019, calling him a future "greatest of all time" cricketer.

Kohli-led India thrashed Pakistan by 89 runs in the June 16 in Manchester.

Ranveer, who attended the game at Old Trafford, said he is impressed the way Kohli had evolved as a player.

"I've been a die-hard fan of Indian cricket since childhood. Invested so much emotion into our beloved team. Willing and wanting them to be the undisputed best in the world. And then, there was Virat Kohli.

"I've witnessed a brash boy evolve into the very embodiment of class. Displaying a rare brand of ferocity and passionate expression, he changed the face of Indian cricket forever," he tweeted on Tuesday.

The "Simmba" star said he was proud of Kohli.

"He's well on his way to being hailed as the greatest of all time. Leading our country like a true alpha warrior. Yeh naya India hai, aur yeh banda naye India ka Hero hai (This is a new India, and this guy is the hero of the new India)" Ranveer said, sharing a few pictures with Kohli from the post-match presentation ceremony.

Ranveer is shooting for his next "83" in Glasgow.