Shakib with 384 runs under his belt has surpassed Australian skipper Aaron Finch (343). 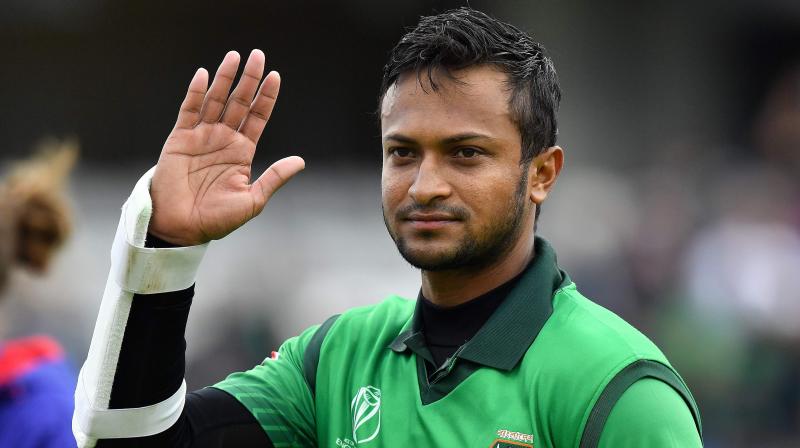 Bangladesh in their last match defeated West Indies by seven wickets after they successfully chased the target of 322 runs. (Photo: AFP)

New Delhi: Bangladesh all-rounder Shakib Al Hasan has become the highest run-scorer in the ongoing ICC Men's World Cup after he played a 124-run knock against West Indies on Monday.

Shakib with 384 runs under his belt has surpassed Australian skipper Aaron Finch (343).

The 32-year-old, currently the world number one all-rounder in the ICC rankings, has been in an exceptional form in the World Cup. He scored 75, 64, 121, 124 runs for Bangladesh in his last four matches and also bagged five wickets.

Bangladesh in their last match defeated West Indies by seven wickets after they successfully chased the target of 322 runs. Shakib found support in Liton Das and the duo stitched an unbeaten 189-run stand.

The senior left-hander Shakib completed his hundred off just 83 balls and Liton Das reached his fifty from 43 deliveries. Shakib and Das finished on unbeaten 124 and 94 respectively, to take Bangladesh over the line with 51 balls to spare.

Bangladesh played five matches in which they manage to win two games and one match was called off due to rain. They faced defeat in the hands of England and New Zealand.

Bangladesh will now play against Australis on June 20 at Nottingham.