The in-form opening batsman has been ruled out of England's match against Afghanistan at Old Trafford. 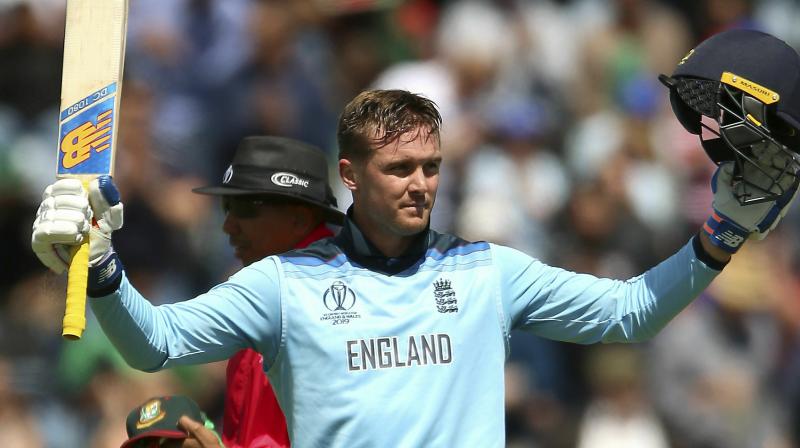 Roy tore his left hamstring in the field during England's eight-wicket win over the West Indies last week. (Photo: AP)

Manchester: Jason Roy is targeting England's match against arch-rivals Australia for a World Cup return after being sidelined with a torn hamstring.

The in-form opening batsman has been ruled out of England's match against Afghanistan at Old Trafford on Tuesday and their pool encounter with Sri Lanka at Headingley on Friday.

Roy tore his left hamstring in the field during England's eight-wicket win over the West Indies last week and did not bat, with Joe Root, who made a century, promoted to open alongside Jonny Bairstow instead.

But having suffered a similar injury during England's tour of the Caribbean earlier this year and with the World Cup featuring a long pool phase that sees all 10 teams play each other ahead of the semi-finals, the 28-year-ol Roy is confident of returning to action.

"I did it in the West Indies and it was a lot worse," Roy told Sky Sports. "It could be way worse -- the scan told me it's minimum 10 days. We've got to assess it as we go along."

"It's a huge understatement being frustrated, but I've got to keep smiling," the Surrey star added.

Roy hit a fifty in England's opening win over South Africa and then struck a commanding 153 in the host nation's victory over Bangladesh.

But he fell for just eight during England's surprise 14-run defeat to Pakistan at Trent Bridge.

Now he hopes to face reigning champions Australia at Lord's on June 25.
"We're targeting Australia but we'll see how this week goes," said Roy, whose opening partnership with Bairstow has been a key factor in England's rise to the top of the one-day international rankings and their status as favourites to win the World Cup.

"If this week goes to plan, then Australia. If not, then who knows. Hamstrings are such a grey area."

England captain Eoin Morgan, who suffered a back spasm during the West Indies match but recovered to face Afghanistan, was in no doubt about Roy's importance to his side.

"I certainly believe Jason will play again in this tournament," Morgan told a pre-match press conference at Old Trafford on Monday. "He's out of the next two games, so we'll see how he pulls up after that."

Morgan said England had not yet discussed who should replace Roy if a permanent replacement were needed, adding: "He's obviously a huge part of what we've been doing. He's in the best form of his life, so he's very important."