The previous highest total in this World Cup was also held by England as they had scored 386 runs against Bangladesh. 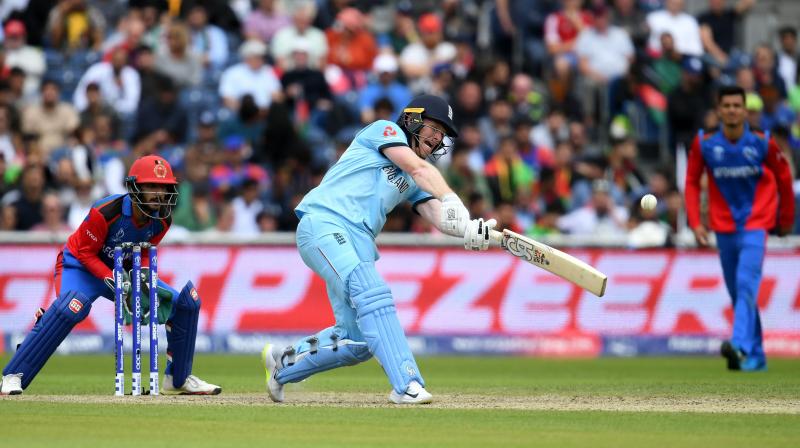 Morgan provided the much-needed impetus to the England innings and Root played second fiddle to him. (Photo: AFP)

Manchester: England registered the highest total in the ongoing ICC Men's Cricket World Cup as they scored 397 runs against Afghanistan on Tuesday.

The previous highest total in this World Cup was also held by England as they had scored 386 runs against Bangladesh.

Openers James Vince and Jonny Bairstow provided a steady start at the top as the duo put on a partnership of 44 runs, but their stand was cut short as Vince was sent back to the pavilion in the 10th over by Dawlat Zadran.

Joe Root came out to bat next and he continued his rich vein of form. He along with Bairstow put together a partnership of 124 runs, which saw the right-handed Bairstow bringing up his fifty. Bairstow missed out on his century as he was dismissed for 90 after being dismissed by Afghanistan skipper Gaulbadin Naib, reducing England to 164 for two in the 30th over.

Skipper Eoin Morgan came to the crease next, and he started playing in aggressive fashion from the very start. Morgan provided the much-needed impetus to the England innings and Root played second fiddle to him.

Morgan brought up his century off just 57 balls, registering the fourth fastest century in the World Cup. The left-handed Morgan continued to pile on the misery on the Afghanistan bowlers, but Root (88) finally departed in the 47th over, bringing Jos Buttler to the crease.

England skipper Morgan hit 17 sixes in his innings, recording the most number of sixes by a batsman in a single ODI. Morgan finally departed in the 47th over after playing a knock of 148 runs off just 71 deliveries with a strike rate of 208.45.

Buttler (2) failed to leave a mark as he was dismissed by Zadran in the 48th over and Stokes (2) also departed early.

However, Moeen Ali ensured that England posts a healthy total on the board and he played a cameo of 31 runs to take England past the 390-run mark. Rashid Khan was the most expensive bowler for Afghanistan as he conceded 110 runs in his nine overs