Sent in to bat first, the West Indies set a target of 322 but Shakib, who scored an unbeaten 124 off 99 deliveries guided Bangladesh home. 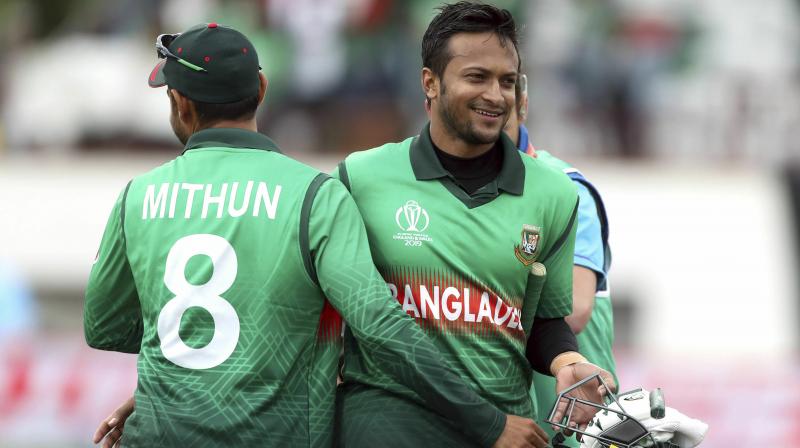 Shakib scored his second century in a row as Bangladesh pulled off the second highest successful run chase in the tournament’s history to beat twice champions West Indies by seven wickets. (Photo:AP)

Bangladesh’s successful run chase against West Indies at the World Cup on Monday was aided by a calm and confident dressing room atmosphere that the players were able to replicate on the pitch, all-rounder Shakib Al Hasan has said.

Shakib scored his second century in a row as Bangladesh pulled off the second highest successful run chase in the tournament’s history to beat twice champions West Indies by seven wickets.

Sent in to bat first, the West Indies set a target of 322 but Shakib, who scored an unbeaten 124 off 99 deliveries, and Liton Das, who smashed 94 not out, guided Bangladesh home with 51 balls to spare.

“At the end of the first innings, we thought it would be tough but everyone was comfortable and chilling,” Shakib, who scored 121 against England in his last innings, told reporters.

“There was a lot of confidence and belief that we could chase it. Once we started batting, everyone felt comfortable and relaxed in the dressing room which helped us a lot. At no point did we have to panic.

“It is one of the best wins because of the way we paced the innings. I was never in a rush. I was patient to wait and put the bad ball away. Every time I did that quite well.”

The victory kept fifth-placed Bangladesh firmly in the hunt for a semi-final berth ahead of their next match against table-toppers Australia at Trent Bridge on Thursday.

In Mitchell Starc and Pat Cummins, Australia have two of the top three wicket-takers at this World Cup but Shakib said his team showed they could handle the best quicks in the world against South Africa, New Zealand, England and West Indies.

“We’ve faced some of the best fast bowlers in the last four matches – every team has at least two bowlers who bowl 140 kph and we’ve coped well so we’re not worried about that,” he added.

“We are a skilled team and we are capable of countering those challenges.”