Stoinis picked a left side strain while bowling during his team's match against India on 9 June. 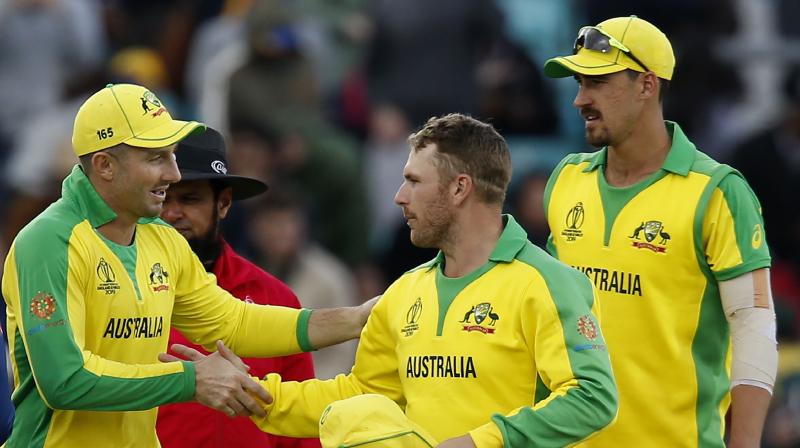 The defending champions will now face Bangladesh for their next World Cup clash on June 20. (Photo: AFP)

Melbourne: After all-rounder Marcus Stoinis' injury, the Australian side are facing major challenges in choosing their playing XI as assistant coach Brad Haddin said that they are still finding their best.

"At the moment, we're still trying to find that best XI. Marcus' has thrown a spanner into everything there with his injury and how important an allrounder is. We're still trying to find what works best for us. Come later in the tournament, we'll start to understand what the conditions are like a lot better and what ... our best XI (is). At the moment, we're not settled on our best XI," Cricket.com.au quoted Haddin as saying.

Stoinis picked a left side strain while bowling during his team's match against India on 9 June. Keeping the seriousness of the injury in mind, the team has called Mitch Marsh to London, who will join the squad as cover.

Haddin further added that they are making sure that each and every player is ready to deliver whenever the team needs.

"One of the things we spoke to the squad about is we need to be a flexible squad to win a World Cup. The players understand that and we're training them accordingly. We make sure each and every player is ready for game day,"

Haddin also backed Usman Khawaja, who has not been able to leave a mark on the field so far, saying that he has been in a role where there are lesser opportunities.

"He's playing a different role. It's not that he's not having success, he's been in a role where he's had limited opportunities. Before he could go out and set the pace of the innings and now the innings is dictating the role he needs to play.

"He's been okay with it - he's a class act. He's had little cameos throughout. We're pretty happy with where he's at. He's just got to bat (according to) the situation," he said.

The defending champions will now face Bangladesh for their next World Cup clash on June 20.