Pakistan delivered an all round show to trash their arch rivals and win their maiden Champions Trophy trophy. 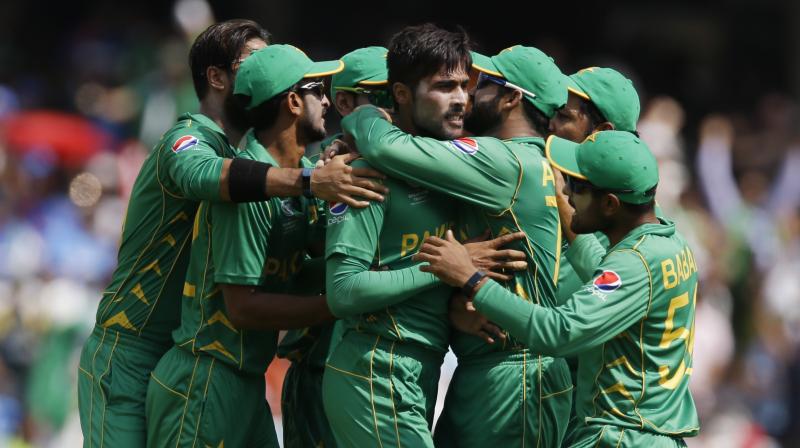 London:  Pakistan have gotten just the start that they were looking for. Three wickets in the first 10 overs gives them the firm upper hand for now. The icing on their cake is the fact that they have sent India's top three run-getters in the tournament -- Rohit Sharma, Virat Kohli and Shikhar Dhawan -- back to the pavilion.

WICKET! Another one bites the dust! This time, Ashwin edges it into Sarfraz Ahmed's hands. One more wicket to go, for Pakistan.

WICKET! Another one bites the dust! This time, Ashwin edges it into Sarfraz Ahmed's hands. One more wicket to go, for Pakistan.

WICKET! Ravindra Jadeja slashes hard at the ball, but only managed to edge it straight into the safe hands of Sarfraz Ahmed behind the wicket. India 8 down.

WICKET! Huge mix-up between the wickets, as both Jadeja and Pandya end up at the same crease. Hafeez sends the throw to the bowler's end, as Hasan whips off the bails with Pandya nowhere in sight. It looks all but over for India, now.

Hardik Pandya is taking the attack to the Pakistan bowlers, though India look all but down and out right now. He scores the fastest 50 in a world ODI final.

WICKET! Shadab Khan strikes again. Its all going downhill for India, here. A complete batting collapse, as Kedar Jadhav edges it high into the sky, as Sarfraz takes an easy catch.

India are in a real soup now. This is arguably one of the most comprehensive performances against Team India, in quite some time. Half of India's top order is back in the pavilion now, and it looks extremely difficult for the Men in Blue to come back from this point.

Huge pressure on India. All of their top three run-getters are now back in the dressing room, as Pakistan take a commanding position in the match.

What a start by Pakistan. Sarfraz Ahmed and co are not giving away an inch today. Aohammad Amir has been lethal with the ball, sening two of India’s best, and in-form batters Rohit Sharma and Virat Kohli back to the pavilion.

However, Shikhar Dhawan however, is mounting the counter attack, as he hit the first two boundaries of the India innings.

WICKET! Amir is on fire today! He completely out-foxed Kohli in that over. First, Kohli edged one to Azhar Ali, who dropped a regulation catch in the slip cordon. However, Kohli played an uppish drive in the very next ball. Shadab Khan held on to the catch this time.

WICKET! This is exactly the start that Pakistan were looking for. Mohammad Amir swings one back into Rohit, who was rapped on the pads plumb in front of the stumps.

Pakistan have come out all guns blazing against arch-rivals India, in the 2017 ICC Champions Trophy final, at The Oval, in London, on Sunday.

Having been put in to bat by Virat Kohli, Pakistan got off the blocks early on, as Azhar Ali (59) and Fakhar Zaman (114) gave them a great start.

The Indian bowlers struggled to contain Pakistan as the two openers scored freely, before a lack of communication while running between the wickets left both of them at the same crease. Azhar gave way, sacrificing his wicket, as Dhoni uprooted the stumps from a Jasprit Bumrah throw; the duo posted a 128-run partnership, to pave the way for a big total.

While it was an important breakthrough for India, the Pakistanis managed get the partnerships going, as Zaman continued his fine hitting, with Babar Azam (46) holding fort at the other end.

India’s decision to play two spinners seemed to have backfired, as they took a real battering, going for 164 runs from 21 overs. Part timer Kedar Jadhav was the only spinner to pick up a wicket, as he removed Babar Azam in the death overs.

The Indian pacers Bhuvneshwar Kumar and Jasprit Bumrah did well to rein the Pakistan batsmen back in the last few overs, to some extent. However, Pakistan already had a lot of runs on the board, due to their brilliant start, and set India a mammoth target of 339 runs.

Pakistan continue their march towards big total despite losing a couple of wickets in quick succession at The Oval in London on Sunday. They are already 300 up and look good to go past 330.

Pakistan continue their march towards big total despite losing a couple of wickets in quick succession at The Oval in London on Sunday. They are already 300 up and look good to go past 330.

300 up for Pakistan as Mohammad Hafeez and Imad Wasim are using the long handle to good effect. 3 more overs to go, how many runs will Pakistan score?

Pakistan have not taken a step back even after losing a wicket today and that has helped them a great deal. 294/4 from 45 overs and six wickets, Pakistan will be gutted if they fail to score anything below 340 from here.

WICKET! Kedar Jadhav has done it again. Babar Azam tries to take Kedar on but mistimes one and Yuvraj Singh makes no mistake holding onto an easy catch in the deep.

WICKET! Brilliant bowling by Bhuvi. Sends in the odd bouncer after beating Shoaib Malik past the bat a couple of times. Taken by surprise, Malik tried to swat it on the off side, but only managed to lob it high in the air, for Kedar Jadhav in the deep.

15 overs to go, 8 wickets in hand. How many will Pakistan score after enjoying such a brilliant start? Or will India just turn the tables on Sarfraz Ahmed and Co?

WICKET! Hardik Pandya has done the trick for India. Fakhar Zaman gets out after a fine hundred in a big final. The left-hander tries to hammer one but mistimes it and Ravindra Jadeja does a brilliant job taking a catch running back from point.

Fakhar Zaman has made sure Pakistan don't bog down after Azhar Ali's dismissal. He has tonked Ashwin and Jadeja to all parts of the ground at will since Azhar's wicket. Pakistan's run-rate has moved closer to 6 now. Fakhar is 4 runs away from his maiden international hundred.

India are looking to tighten the screws on Pakistan after Azhar's dismissal as Jadeja and Ashwin look to complete their overs in a jiffy. India though alos need wickets to not allow Pakistan to build on a solid start.

WICKET! Breakthrough for India, finally! Bumrah's no-ball cost India an early wicket but he does not make any mistake this time around to pull off a stunning run-out. Azhar Ali pushes one to the leg-side and starts to run, Fakhar is too busy ball-watching. Azhar is stranded. MS Dhoni makes no mistake to dislodge the bails. Pakistan 1 down.

What a fine start this is for Pakistan! Azhar Ali and Fakhar Zaman have brought up their fifties as Pakistan are off to a flying start in an all important final. The two have pushed Indian bowlers under pressure. India need a breakthrough and need it real quick.

Pakistan openers continue to trouble India with timely big shots. It also helps as Indian fielders have not managed to hit the stumps directly when there was a chance. All and all, a good start for Pakistan.

OH DEAR BUMRAH! What drama! Fakhar Zaman must be thanking his stars as he survives a caught behind dismissal as Bumrah oversteps the line and bowls a no-ball. gets an edge off a no-ball. Fakhar has not been fluent but he is still in the middle.

India are fielding the same playing XI which defeated South Africa and Bangladesh (in the semifinal) as R Ashwin, who had hurt his knee during practice on the eve of the final, is taking field.

Pakistan,meanwhile, have brought back Mohammed Amir, who could not feature in Pakistan's playing XI in the semifinal win against hosts England.

Virat Kohli’s India and Sarfraz Ahmed’s  Pakistan will once again battle it out for an ICC trophy, when they face-off in the final of the ICC Champions Trophy. The last time they met in a summit clash was 10 years back, when India clinched the World T20 title, in a thriller at Johannesburg.

Both teams have considered this game as “just another game”, given the hype of the match. But neither of the teams will take each other lightly, and will expect tough competition.

Even before the tournament, India seemed like full-strength squad, and many of the cricket experts were backing India to reach the semifinal. Well, here they are, in the decider of  the Champions Trophy, with India seeking to defend the title.

India seems an experienced side coming into this match, when compared to the side which won the 2013 edition. Openers Rohit Sharma and Shikhar Dhawan have come a long way, when looking back to four years back, and both of them have had a successful tournament.

The Indian bowlers, too, have improved in the last couple of years, with them having a stroing pace attack, consisting of Umesh Yadav, Mohammad Shami and Bhuvneshwar Kumar. The major worry for India would be Ravichandran Ashwin, who had hurt his knee during practice on Saturday. However, despite this, he should be fit to play.

Pakistan, on the other hand, have sprung a lot of surprises throughout the tournament. Entering the tournament as underdogs, they defeated South Africa, Sri Lanka and England in their road to the final, despite losing their opener to India two weeks back.

The Men in Green though, has had a tournament plagued with injuries. With Wahab Riaz gone after the first match, Rumman Raees came in, and along with him were Fakhar Zaman and Fahim Ashram, who have had a good tournament so far.

However, the big boost for Pakistan will be the availability of pacer Mohammad Amir, who was confirmed fit to play, after missing out on the semifinal against England.

It will be all to play for when the Asian heavyweights take centre-stage at The Oval with a common goal for clinching the Champions Trophy.