MS Dhoni recently met Pakistani wicketkeeper and his family after an ICC match. A photograph of this meeting was shared with The Asian Age. 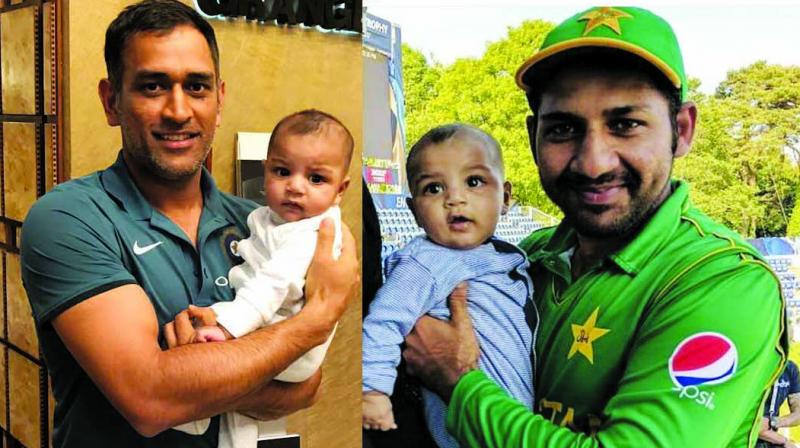 After beating Bangladesh in Birmingham, Dhoni met Sarfraz, his wife Khushbakht, and their four-month-old son Abdullah. An adorable photograph of Abdullah in Dhoni’s (safe) hands was shared with The Asian Age by Sarfraz’s India-based mama (uncle), Mehboob Hassan.

This is the story of two wicket keepers — one, a former Indian captain and the other, a skipper of the Pakistani cricket team. Both of them will face each other on the pitch for the ICC Champions Trophy at the Oval in London today. And while history has mostly shown India and Pakistan being at loggerheads with each other, off the cricket field, MS Dhoni and Sarfraz Ahmad are definitely not rivals.

After beating Bangladesh in Birmingham, Dhoni met Sarfraz, his wife Khushbakht, and their four-month-old son Abdullah. An adorable photograph of Abdullah in Dhoni’s (safe) hands was shared with The Asian Age by Sarfraz’s India-based mama (uncle), Mehboob Hassan.

“It’s only on the field that the rivalry between Indian and Pakistani players comes alive. Families of the players don’t mind interacting with each other,” said Mehboob Hassan, who works as a senior clerk at the Agricultural Engineering College, in Etawah in west Uttar Pradesh.

Referring to the photograph, Mehboob recalls: “Sarfraz and Khushbakht got married in May 2015 and our entire family went to Pakistan. We stayed there for a few days. Abdullah, the four-month-old boy is their first child.”

In fact, even back home in Pakistan, Sarfraz’s mother Akeela Bano was delighted to see the photograph of the famous Indian cricketer holding her grandson so gently. “It is a very fine gesture by Dhoni. I showed this photo to all my children and relatives here. My married daughter, who visited us yesterday was pleasantly surprised to see Abdullah in his hands,” said Akeela, who spoke to The Asian Age exclusively from Karachi.

Revisiting old times, she added that her husband was not alive to see how successful Sarfraz is today. “He died a few years ago but he did watch our son playing in the Under-19 World Cup,” said Akeela.

Talking about the game, she said, “Obviously, I have to support the country for which my son plays and inshallah, Pakistan will win tomorrow.” But before ending the call, she also wished Virat Kohli good luck.