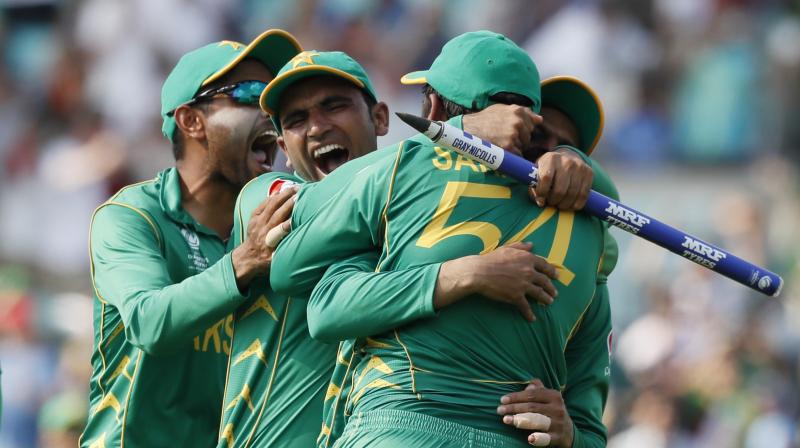 Teammates embrace Pakistan's captain Sarfraz Ahmed, back to camera after they defeated India during the ICC Champions Trophy final at The Oval in London. (Photo: AP)

London: Everything that could go wrong, did do wrong for India as Pakistan silenced their critics, gave their fans a pleasant surprise, and handed India a thumping 180–run defeat to clinch their maiden ICC Champions Trophy title at The Oval in London on Sunday.

India won the toss and perhaps that was the only thing they won in addition to Bhuvneshwar Kumar’s fine bowling display and Hardik Pandya’s fifty. Otherwise, everything went amiss. Spinners – R Ashwin (10-0-70-0), Ravindra Jadeja (8-0-67-0) and Kedar Jadhav (3-0-27-1) leaked 164 runs in 21 overs and scalped just a wicket.

Jasprit Bumrah missed his line, length and step as he conceded 68 from his 9 overs and while Pandya had one of his better bowling days in the tournament that was never going to be enough as Pakistan marched towards 338 runs.

India missed direct hits when it mattered, they bowled no-balls when batsman (read Fakhar Zaman) edged and got caught, bowled negative lines in pursuit of containing Pakistan openers and although Pandya hit some meaty blows to score a fastest half-century in ICC ODI event final, it was too little too late.

While India had chased down targets over 340 in ODIs with consummate ease in the past, Mohammed Amir, who missed the England semifinal due to back spasms, made sure India didn’t in the all-important final.

Amir was fearsome and two from India’s top three run-getters in the tournament – Rohit Sharma and Virat Kohli – felt the heat, courtesy his good bowling and some poor shot making before Shikhar Dhawan got out edging one to the keeper and skipper Sarfraz Ahmed.

Yuvraj, despite that cover drive of his, never looked at ease at the crease and was trapped before the wickets before Hasan Ali got the better of MS Dhoni. Kedar joined the bandwagon as Shadab scalped his second.

Pandya was brave and he entertained but his chaotic run-out, following a mix-up with Jadeja, was pretty much summed how India performed today in the field.
Mohammed Amir stretching his arms and running past the batsman is one of the sights to be watched. Breathtaking, if you are a cricket fan and not much so if you are supporting the opposition he is up against.

Indian fans were made to feel the Amir run as he ruptured India’s batting right at the start of chase. He has some history with England and he added another chapter in that story; a chapter Pakistan and the entire cricketing fraternity will remember for a long time.