Bangladesh got off to a quickfire start as openers Tamim Iqbal and Soumya Sarkar scored 59 runs inside six overs. 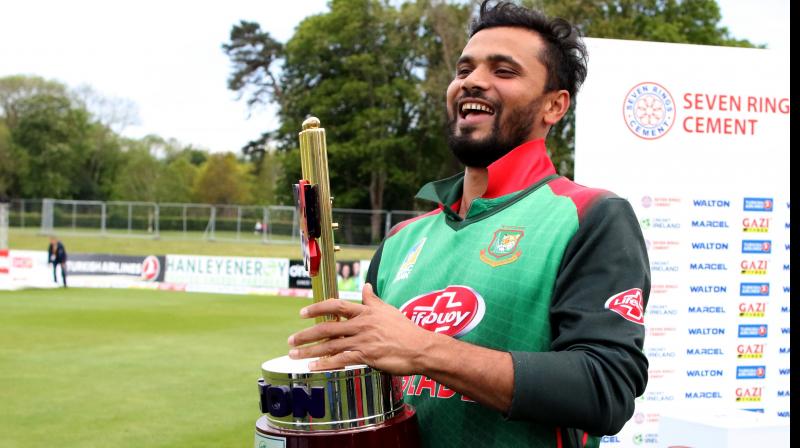 Bangladesh next takes on South Africa in their opening match of the World Cup on June 2. (Photo: AFP)

Dublin: Bangladesh defeated West Indies by five wickets at Dublin on Friday (local time) in the finals of the Tri-nation series. The match was shortened to 24 overs per side due to rain.

Chasing a score of 210 runs in 24 overs, Bangladesh got off to a quickfire start as the openers Tamim Iqbal and Soumya Sarkar scored 59 runs inside six overs.
West Indies staged a comeback as they dismissed Iqbal (18) and Sabbir Rahman (0) in quick succession reducing the team to 60 for two.

Sarkar along with wicket-keeper batsman Mushfiqur Rahim put together a partnership of 49 runs, but West Indies dismissed the key batsman Sarkar (66) in the 12th over.

Windies dismissed both Rahim (36) and Mohammad Mithun (17) in quick succession to gain the upper hand in the match.

But, Mosaddek Hossain had other plans and he played a knock of 52 runs off just 24 balls to allow Bangladesh to gain a remarkable victory over West Indies. Hossain and Mahmudullah took the over the line by five wickets and with seven balls to spare.

Earlier, Shai Hope and Sunil Ambris played knocks of 74 and 69 respectively to allow West Indies post 152 runs on the board.

Both the openers stitched together a partnership of 144 runs in 22.4 overs. Hope (74) was dismissed by Mehidy Hasan Miraz in the 23rd over.

West Indies scored 152 runs in the allotted 24 overs, but their score was adjusted on the basis of Duckworth-Lewis and their score was increased to 209 runs as they had lost the only wicket after the completion of 24 overs.