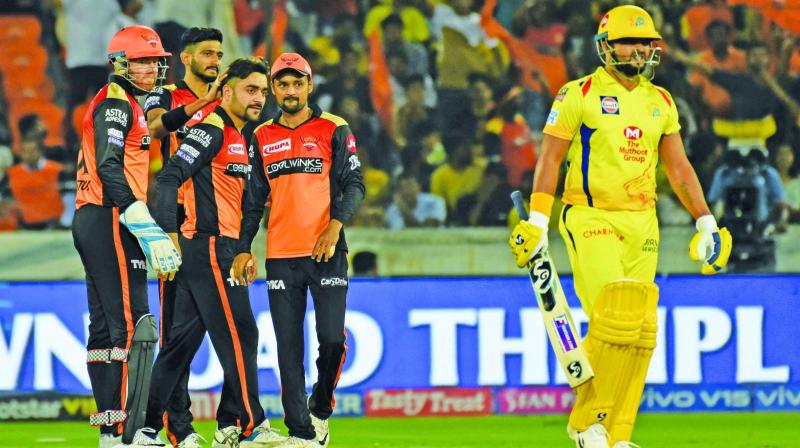 Hyderabad: When in Rome, do as the Romans do. The Chennai Super Kings did a Sunrisers Hyderabad as they rattled off to a rousing start and then turned rats to finish at a lowly 132 for 5 which the hosts overhauled with six wickets in hand.

Orange openers David Warner and Jonny Bairstow smashed 66 for the opening wicket by the sixth over and had run away with the game, leaving the Yellow band playing catch-up.

Warner smacked 10 boundaries to score a fluent 50 off 25 balls, his fifth half-century this season (which includes a ton as well) as he put the hosts on path to victory. It was also the Australian left-hander’s 42th IPL half-ton and the 30th for Sunrisers — he made 12 while batting for his previous team of Delhi as well.

Bairstow blasted an unbeaten 61 (44b, 3x4, 3x6), his first half-century in IPL – he had scored a century against RCB a fortnight ago — as the hosts made it an open and shut case via the Aussie-English combination.

Imran Tahir was the only decent bowler for CSK, taking 2 for 20 in four overs.

Earlier, Chennai came a cropper in the second half of their innings as they managed a mere 52 while losing four wickets in the last 10 overs.

Making first use of the wicket after winning the toss, the visitors unleashed two ferocious Lions at the start. Openers Shane Watson and Faf du Plessis did very well to take the team to 79 in the 10th over when left-arm spinner Shahbaz Nadeem broke the partnership with a beauty that beat Watto and wrecked his stumps. The big Australian hit four boundaries in his 31.

Soon, du Plessis, who was batting brilliantly and had struck three sixes — two against Nadeem and one hit off seamer Khaleel Ahmed – and an equal number of fours, fell, edging Vijay Shankar’s second ball to Jonny Bairstow behind the wickets. CSK 81 for 2.

Suresh Raina, Kedar Jadhav and Sam Billings did not make much noise as Chennai crumbled to 101 for 5, much the disappointment of half-the-crowd at Rajiv Gandhi International Cricket Stadium that was bathed in yellow even as Mahendra Singh Dhoni sat out of the game. They went wild though whenever the talisman was shown on the big screen, characteristically expressionless in non-playing areas.

An unbroken sixth wicket stand of 31 off 32 balls between A. T. Rayudu (25) and Ravindra Jadeja (10) was the next best partnership of the innings after the one raised by the openers. It didn’t count in the end though.