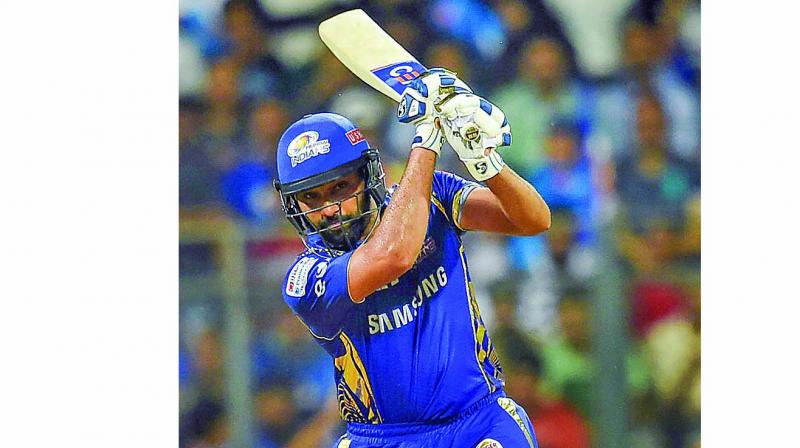 Rohit Sharma returned to form in style with a 52-ball 94. (Photo: PTI)

Mumbai: Evin Lewis’ thunderous knock and Rohit Sharma’s class act took Mumbai Indians to 213/6 against Royal Challengers Bangalore at the Wankhede Stadium here on Tuesday. The visitors would need a monumental effort to overhaul the target. Overcoming the blues of the past three games, Rohit blazed to a 52-ball 94 before getting caught at the long-on boundary.

Few could have foreseen such a formidable score from the hosts after they endured a miserable start. Suryakumar Yadav fell to Umesh Yadav’s in-swinger in the first ball and Ishan Kishan perished to the same bowler in the same manner to leave Mumbai tottering at 0/2.

Lewis, a witness to the havoc wreaked by Umesh, got the home side back on track through a fine counter-attacking innings. He ensured that RCB weren’t able to assert themselves riding on the early strike as he scored 11 runs in the next over and 19 off Washington Sundar in powerplay.

Lewis (65) along with Rohit took the score to 60 in the first six overs. While the West Indian played the role of the aggressor, Rohit found the gaps to build a partnership of 108 runs. Corey Anderson who made his debut for Bangalore against his former team dismissed Lewis in the 12th over. A top edge spelled the end of the enterprising left-hander.

The spinners Sundar and Yuzuvendra Chahal went wicket-less for a total of 64 in five overs while Mohammed Siraj who conceded 18 in his first over managed to come back strongly by giving away 18 in his next three.

The Mumbai skipper was well entrenched by then and he took charge of the situation in his own inimitable style and brought up his 33rd IPL fifty. Krunal Pandya (15) and Hardik Pandya (17) played their cameos to set a target of 214. Both teams, languishing at the bottom end of the table, are desperate for a win.