A rhino named after Rohit’s daughter

The message to Ritika and Rohit Sharma has been conveyed by the CEO, Richard Vigne. 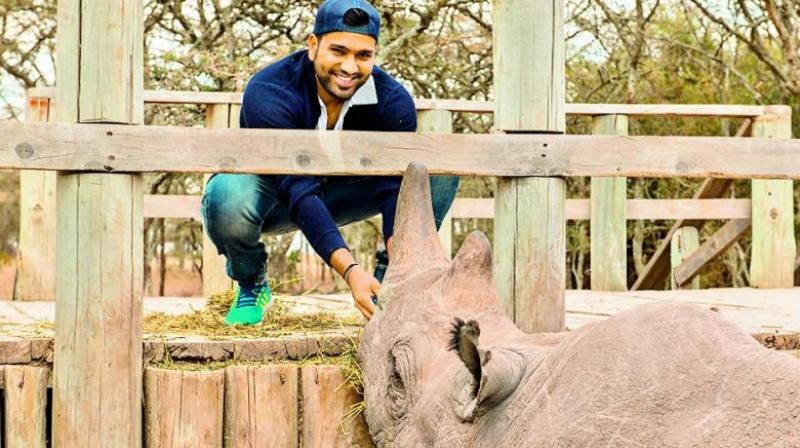 Rohit Sharma with the black rhino,

The Ol Pejeta Wildlife Conservancy in Kenya has named its newly-born female black rhino as Samaira Sharma, after Team India’s top order batsman Rohit Sharma’s daughter. The message to Ritika and Rohit Sharma has been conveyed by the CEO, Richard Vigne.

“Rohit and his wife visited Ol Pejeta Conservancy back in September 2015. Rohit’s visit was part of a campaign to raise awareness about the plight of rhinos all over the world and the devastating effects of poaching”, Elodie A. Sampéré, the PR, Communications and Fundraising Consultant, speaking exclusively over telephone from Kenya, said. “He (Rohit with his wife) visited Sudan, the last male northern white rhino – who died last year on March 19th, 2018”, she added.

His visit was part of a campaign called ‘Stars 4 the last male standing.’  It was organized to raise awareness about the plight of the northern white rhino. During his trip, Rohit Sharma also met Baraka, the blind black rhino.

Explaining more about rhino, she said, “In the wild, rhinos usually live up to 30 – 35 years old. In captivity, they can live up to 45 years old”.

“This made us so emotional! This is so special! Conservation of Rhinos is a cause so close to our hearts & Sudan meant so much to us. Thank you @OlPejeta for this honour. Can’t believe our two month old has a Rhino named after her in Africa, unbelievably special”, Rohit Sharma has tweeted in response.