The Bandra Blasters skipper urges sharp execution from bowlers and good starts from opening batsmen in the T20 Mumbai League. 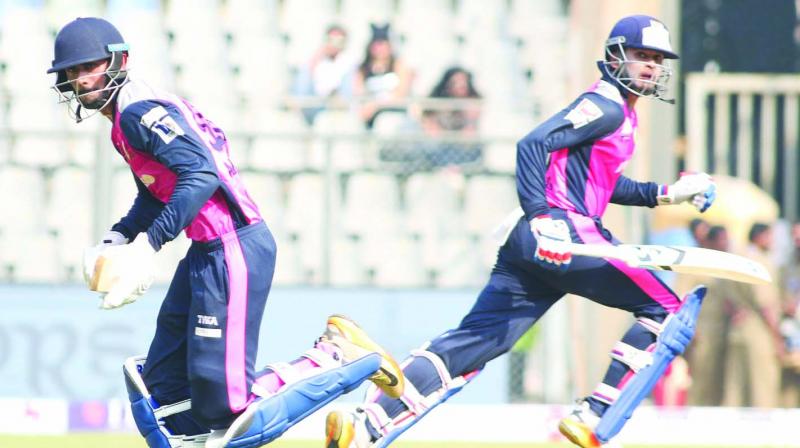 “Aman and I have done well. But but the other batsmen need to capitalise.We need good starts.” Shreyas Iyer

Shreyas Iyer must have missed out on an India berth for the Twenty20 tri-series in Sri Lanka after spending a few months with the Virat Kohli-led side. He may have been unfortunate to miss out on the BCCI’s annual contract as well. But the 23-year-old who played six T20Is and as many ODIS for India during the home series against New Zealand and Sri Lanka last year (November, December) and South Africa on an away tour in February, is not letting it impact his batting form.

In-form Iyer led India B to the Deodhar Trophy win recently in Dharamshala and has scored three half-centuries already in four matches while captaining Namo Bandra Blasters with great intensity in the field. He has been the most successful icon player so far. His counterparts like Ajinkya Rahane and Siddhesh Lad have struggled with their form and injuries. Rohit Sharma is yet to feature and may not get a chance to play as his team ARCS Andheri have lost three of their four games and are virtually out of contention for the playoffs. Abhishek Nayar has done decently as an allrounder.

Iyer’s first two half centuries resulted in team wins. Along with Aman Khan, he has been the core of Bandra Blasters batting. The one time he failed, his team ended up putting up a mediocre score. On Friday night, afer a slow start, Iyer accelerated to 72 off 57 balls, with the help of two fours and five sixes. Aman Khan then stole the show with a 47-ball 85-run knock to guide Blasters to 184.

But it wasn’t enough in the end as Akash Parkar smashed a last ball six to sneak third win for Mumbai North East Triumph Knights.

“I am doing good but it doesn’t matter that much, when we lose. We have done good as a batting side, apart from last match. Aman and me have done well in the middle overs and finished well but other batsmen need to come and capitalise. We need good starts,” he said.

Parkar smashed four big sixes and Vinayak Bhoir two sixes as Knights brought back memories of their first match, to chase 44 in 12 balls. Medium pacer Azhar Ansari conceded 23 in the penultimate over, while Prashant Bhoir gave the required 21 in last over. Shashank Singh had earlier scored 42 while Suryakumar Yadav scored a brisk 36.

“I thought we were going to win, that bowler (Ansari) panicked and momentum shifted, two sixes (by Parkar), changed the game. There were still 21 runs required in last over, but first two balls six (by Vinayak) did it. It is not acceptable when bowlers aren’t executing captain’s plan. We have lot to improve in fielding and bowling,” Iyer fumed.

After two consecutive losses, Bandra Blasters now have a must-win last game against North Mumbai Panthers on Sunday. “It is a knockout game for us. We have to come out with a strong win and put all our efforts in it,” he said,

Shivaji Park Lions improved their chances of making it to the playoffs with a convincing win over ARCS Andheri at the Wankhede Stadium here on Friday night.

Bowling first, Lions restricted the ARCS to 149 for 8 with some very accurate bowling. Stand in skipper Bravish Shetty then anchored the Lions’ chase with a solid unbeaten 50-run knock to see his team home with 10 balls and six wickets to spare. The win lifted Lions to four points, same as the SoBo Supersonics and NaMo Bandra Blasters. Triumph Knights Mumbai North East are at the top the table with six points.