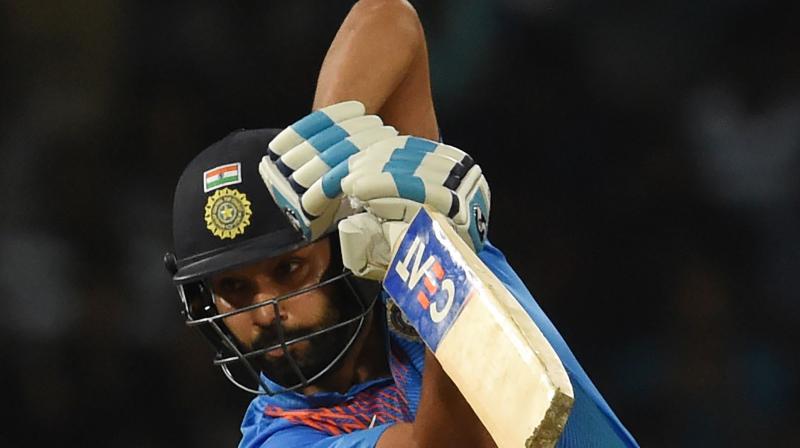 Captain Rohit Sharma led from the front as he scored a match-winning 56.

India were under pressure right from the start of the chase, especially after losing Shikhar Dhawan (10 runs) and Suresh Raina (0 runs).

Manish Pandey (28 runs), too, played a very important role in the middle to help India chase the target.

India lost a flurry of wickets in the middle-overs, but knocks by Dinesh Karthik (29 runs) and Manish Pandey ensured that they lifted yet another trophy.

The match went down to the wire, with India needing 12 runs to win from the final over.

India just managed three runs from the first three balls, but that was followed by a four by Vijay Shankar.

However, in the following ball, Shankar departed for 17 runs and in came Washington Sundar.

Meanwhile, The Men in Blue needed five runs from the final ball, and it was Dinesh Karthik who smashed an MS Dhoni-style six to take home the Men in Blue with another trophy.

WICKET! Nazmul Islam has got the crucial wicket of Rohit Sharma, who departs for 56. Will this change Bangladesh's fortunes?

FIFTY! Rohit Sharma hits half-century number 14 in T20Is. Will this be a match-winning effort?

WICKET! KL Rahul departs for 24 as India lose yet another wicket.

WICKET! Suresh Raina has failed to score any run in this match as he departs for a duck. Huge blow for India.

WHAT AN OVER! It is Rohit Sharma all the way as he smacks two sixes and one four in this over.

Bangladesh bounced back on to post a respectable total of 166-8 from 20 overs in the final of the Nidahas Trophy against India here on Sunday.

Yuzvendra Chahal was the star of the Indian bowling attack, having picked up three wickets in his four-over spell.

Earlier, Bangladesh, put to bat by India, got off to a promising start but lost Liton Das early.

Since then, nothing seemed to work for them as they even lost their marquee batsman Musfiqur Rahim for nine runs.

However, Sabbir Rahman, who put up a 29-run stand with captain Shakib Al Hasan (7 runs), came to the rescue as he played a knock of 77 to steer Bangladesh to safety.

WICKET! It is Unadkat at it again as he removes Rubel Hossain for a duck.

WICKET! Jaydev Unadkat has finally got a wicket as he removes dangerman Sabbir Rahman for 77.

WICKET! Dangerman Shakib Al Hasan is run-out as Vijay Shankar makes no mistake in aiming the ball at the stumps. Huge blow for the Bangla Tigers.

WICKET! Mahmudullah has been run-out for 21 runs as India get their fifth wicket. He has just given away his wicket as that run was totally unnecessary, thereby costing his wicket.

WICKET! Yuzvendra Chahal has struck once again as he removes Mushfiqur Rahim for just nine runs. The Men in Green are in deep trouble now.

WICKET! Yuzvendra Chahal has just got his second wicket in his first over as he sees off Soumya Sarkar. Dhawan takes a good catch at backward square to dismiss the batsman.

WICKET! Washington Sundar has struck for India as he removes Liton Das courtesy a catch by Suresh Raina.

Captain Rohit Sharma won the toss and elected to field in their Nidahas Trophy final against Bangladesh.

The Men in Blue made one change, bringing back Jaydev Unadkat in place of Mohammed Siraj.

Meanwhile, Shakib al Hasan has not made any changes to the Bangladesh team, and are playing the same eleven which beat Sri Lanka by two wickets recently.

Here is how the teams will lineup for the tournament decider.

Rohit Sharma-led India and Shakib Al Hasan’s Bangladesh will lock horns for one last time in the 2018 Nidahas Trophy when they faceoff for the final of the tri-nation tournament.

Barring their opening loss to Sri Lanka, India have had a successful tournament so far, winning the remaining matches and thereby topping the points table with six points.

Meanwhile, Bangladesh are coming into the final with a win ratio of 50 per cent in the league stage. Despite losing both the matches to India, the Men in Green produced top-class performances against Sri Lanka in both their encounters, including their dramatic finish to the two-wicket win.

The Bangla Tigers are boosted by the return of skipper Shakib al Hasan, who picked up a wicket in the previous match.

However, they are yet to beat India in a T20I, and will hope to end their winless jinx.

Rohit Sharma’s men, meanwhile, will be eager to prove a point, as they eye triumph without the likes of Virat Kohli, MS Dhoni, Bhuvneshwar Kumar and Jasprit Bumrah.

It will be interesting if India would go ahead with Mohammed Siraj or make a change for this match. Siraj conceded 50 runs from four overs last match, taking just one wicket.

Where to watch the matches live?

Live streaming: It can also be streamed live on the JioTV app.

What time is the match?

The match is scheduled to begin at 1900 hrs IST.