The advice obviously didn’t work well. Players from both teams got even more aggressive. 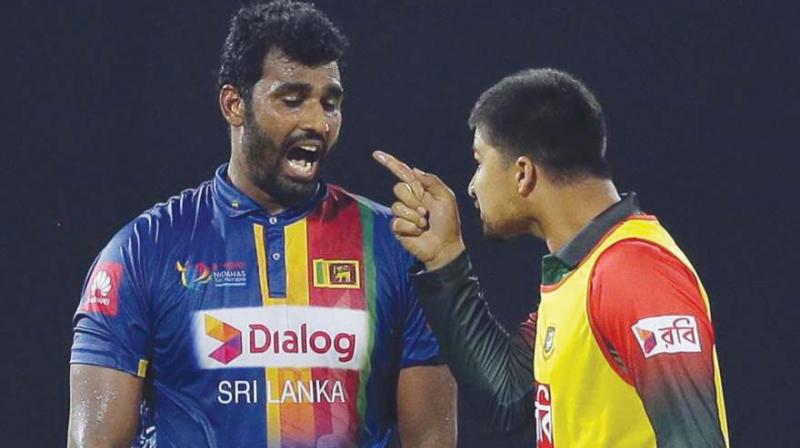 After what transpired between Sri Lanka and Bangladesh players on Friday, the ICC might end up having half the cricket world under scrutiny for indiscipline by the time the new week dawns. And Kagiso Rabada, whose fate is to be decided on Monday, may be the least blameworthy!

As we know, relations between South Africa and Australia have soured so dramatically in the ongoing Test series that the ICC had to step in and ask for a ‘cooling down’ of tempers during the second match.

The advice obviously didn’t work well. Players from both teams got even more aggressive.

This led to Rabada being charged with a Level 2 offence, taking his demerit points to nine which in turn meant that he had to be suspended for two Tests.

Rabada has since contested the ban that comes up for re-examination on Monday. Meanwhile, a video clip of David Warner’s near hysterical send-off to AB de Villiers in the same match went viral.

In comparison, Rabada’s send-off for Steve Smith seemed tamer, which was the point being made by his team-mates. Save, of course, for the fact that the South African fast bowler had ‘brushed’ past the Australian captain.

Even the mildest body contact, however, is anathema according to the ICC rules, which is what got Rabada the ban. But the rightfulness of the punishment has been widely questioned. Among those disagreeing are former England captain Michael Vaughan and — even if obliquely — former Australia captain Mark Taylor.

Will the ICC reconsider the ban on Rabada in light of the video clip on Warner, or the opinions expressed by several former cricketers? And how will cricket’s apex body treat the ugly scenes witnessed between Sri Lanka and Bangladesh in the Nidahas Trophy?

In a tight match on Friday, with a great deal of personal, team and national pride attached, nerves were frayed and tempers between players from the two teams spun out of control. For a while, it appeared the match would be called off.

Thankfully it wasn’t, but the fracas showed up the challenge cricket faces. That the ICC was prompt in penalising Bangladesh captain Shakib Al Hasan and reserve player Nurul Hasan 25% of their match fee plus assigning one demerit point each, however, didn’t convince skeptics that the system was entirely fair.

It remains to be seen how the ICC’s minders respond to these recent events going ahead. But the matches between Australia and South Africa and Friday’s on-field conflict in the Nidahas Trophy shows up the complexities involved.

While rules pertaining to discipline and gamesmanship are terribly important, these are open to interpretation and, rather than resolve matters to everybody’s satisfaction, can lead to more rancour.

I can’t moot a foolproof solution but believe these matters demand greater participation from current players, and particularly captains as mentioned in my previous column. They need to be made to realise that they are the custodians of the sport, and therefore primarily responsible for its good health and reputation.

Elsewhere, Wasim Jaffer’s double ton in the Irani Trophy at age 40 is a remarkable story. It shows not just his class, but also his passion for the sport. These are the kind of players who have kept domestic cricket relevant, with their undying commitment.

Jaffer’s superb effort, otherwise the Irani Trophy this year has turned out to be quite a farce, what with Ranji Trophy champions Vidarbha batting on for three days in posting 800-plus runs before declaring.

I won’t blame Vidarbha captain Faiz Fazal entirely for not making the match more challenging, though his bowlers, especially young Rajneesh Gurbhani showed that they could have been trusted to defend even a smaller total.

In the absence of an outright result, winners are decided on the first innings lead, so captains aim to bat the other side out of the match. But this wouldn’t be a problem unless the pitch is so lifeless that bowlers are brought to their knees and teams can bat on endlessly.

This is unedifying for spectators. And certainly not in the interest of Indian cricket.