Ironically, then also it was a case of Rohit Sharma being caught off a waist high full toss, which was adjudged no-ball by the umpire. 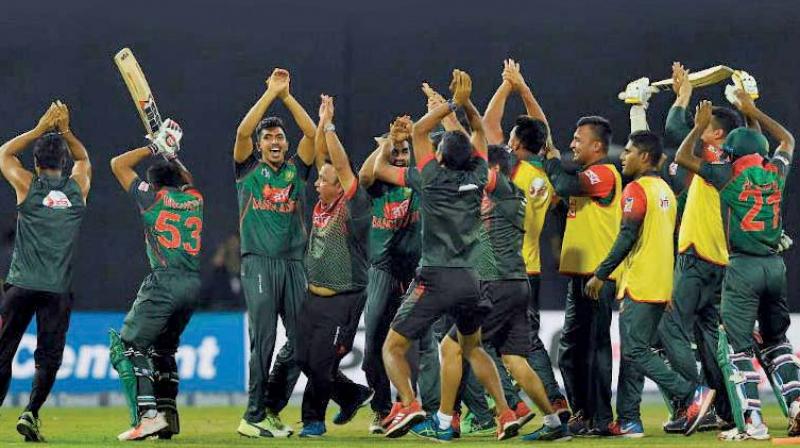 Colombo: A bitter, yet intense rivalry is expected to produce a cracker of a contest when a confident India take on a fiery Bangladesh in the final of the Nidahas Twenty20 tri-series, here on Sunday.

While the second-string Indian team recorded a hat trick of comfortable wins after their opening loss to Sri Lanka, Bangladesh reached the summit clash with couple of dramatic wins over the hosts.

In a tense encounter, in which they beat Sri Lanka last night, with Mahmudullah Riyadh rising to the occasion with a last ball six, will give the “Tigers” immense confidence.

However, an angry Shakib al Hasan’s attempt to call the team off the ground and allegedly damaging of the dressing room by Bangladeshi players is a testimony that they still have some way to go as far as composure is concerned.

Unlike India’s rivalry with Pakistan and Australia, there isn’t any significant cricketing history attached to India-Bangladesh matches.

But since their 2015 World Cup quarter-final defeat in Melbourne where they felt a few umpiring decisions went against them, the tiny nation of cricket fanatics consider India to be their biggest on-field rivals.

Ironically, then also it was a case of Rohit Sharma being caught off a waist high full toss, which was adjudged no-ball by the umpire. Bangladesh team and fans have not moved on since then.

Not to forget a crass advertisement “Mauka Mauka”, which was aired before and during 2015 World Cup, something that Bangladeshi fans still consider as an insult. During the same year, India lost an ODI series in Bangladesh and there were some objectionable photo-shopped billboards of Indian players’ with heads half-shaved, put out across the streets of Dhaka.

For an average Bangladeshi fan, Indian cricket team is perceived as a big bully and the jealousy stemming from BCCI’s financial clout, makes them treat every game against “Men In Blue” as a grudge match. Bangladeshi players’ skills don’t match their zeal always but there will be no inches given when the likes of Shakib al Hasan, Mushfiqur Rahim or Mahmudullah step onto the field.

However in terms of sheer talent, Indian team is a cut above their Bangladeshi counterparts.

Man to man, the opening pair of Rohit and Shikhar Dhawan have scored runs across the globe even though Tamim Iqbal and Litton Das are good on their day.