Chahar also opined that making the cut into the Indian setup through the Ranji trophy is a bit difficult. 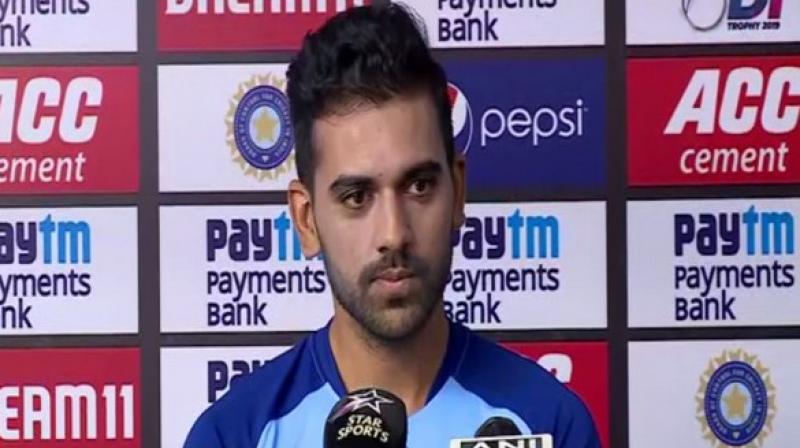 Ahead of the second ODI against West Indies, India pacer Deepak Chahar on Tuesday said that in his opinion ODI cricket is more difficult than both T20 and Test format of the game.(Photo:ANI)

Visakhapatnam: Ahead of the second ODI against West Indies, India pacer Deepak Chahar on Tuesday said that in his opinion ODI cricket is more difficult than both T20 and Test format of the game.

"In my opinion, ODI cricket is difficult as in T20Is you just have to contain. In Tests, you have to go in with an attacking mindset. But in ODIs you have to take wickets and contain runs. I think ODI is more difficult than both Tests and T20s," Chahar told reporters on the eve of the second ODI.

"When I played Ranji trophy, I used to bowl at 125 kmph and I suffered injuries as I was trying to increase my pace. In international cricket, you need to bowl at 140 to trouble the batsmen. I changed quite a few things in my diet and action," he added.

Chahar also opined that making the cut into the Indian setup through the Ranji trophy is a bit difficult as one needs to play a lot of matches to garner the attention.

"I was struggling for my Ranji trophy side as I changed my action. The path for coming into India's setup through the Ranji trophy is tough as you have to play many matches to make the cut. But you can play a bit earlier after making a foray into IPL," Chahar said.

Chahar opined that if the side keeps on dropping chances then West Indies will make the home side pay.

"We should have defended 288 as it was a good wicket to bowl. We did not bowl nicely in the last match and we paid the price. As a bowling unit, we will try to come up with a better performance. We have been lacking in fielding, we have dropped few catches in the last match and if we keep on missing chances, Windies batsman will make us pay," Chahar said.

"In the last match, they chased down 289 and in my opinion, it would be difficult for the bowlers. I have not seen the pitch yet," he added.

The 27-year-old said that the upcoming six months would be very crucial for him and also expressed the desire to play each format of the game for India.

"Obviously, the next six months are very important. Every cricketer dreams of playing each format for the team, initially I was playing just the T20 format, but now I have got the chance in ODIs so it's very good for me and I hope to keep on performing for the side," Chahar said.

"My main focus is to remain fit, I want to ensure that I maintain fitness levels so that I get to play each and every game for the side," he added.

India and West Indies will next lock horns in the second ODI on Wednesday, December 18.