Bumrah has been out of action since July this year and his return to the field can be viewed as a positive outcome. 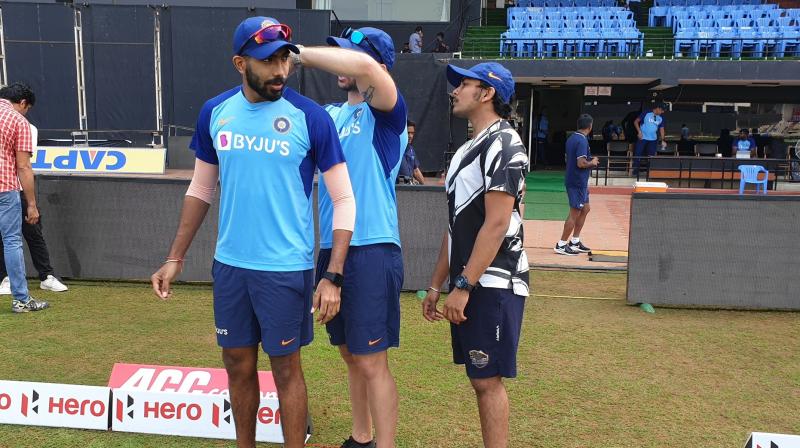 Giving hope to many cricketing fans, pacer Jasprit Bumrah on Tuesday trained with the Indian cricket team ahead of the side's upcoming second ODI against West Indies. (Photo:Twitter)

Visakhapatnam: Giving hope to many cricketing fans, pacer Jasprit Bumrah on Tuesday trained with the Indian cricket team ahead of the side's upcoming second ODI against West Indies.

Bumrah has been out of action since July this year and his return to the field can be viewed as a positive outcome. Although he continues to be out of the team, the side would hope that he makes a comeback ahead of the upcoming away series against New Zealand.

The Board of Control for Cricket in India (BCCI) posted a picture of Bumrah and captioned it as "Look who's here".

Opening batsman Prithvi Shaw was also seen at Vizag, having a session with the Indian cricket team. Earlier, this year he was handed a ban by the BCCI for a doping violation. Shaw registered his maiden double-century in the ongoing Ranji Trophy after making a return to the game.

Bumrah was first ruled out of the Test series against South Africa on September 24 due to a minor stress fracture in his lower back.

He was then replaced by Umesh Yadav in the Indian squad.

Bumrah played his last game against the West Indies in which he took seven wickets.

In the second Test of the series against Windies, Bumrah became only the third Indian bowler after Harbhajan Singh and Irfan Pathan to record a hat-trick in the longest format of the game.

Bumrah is a vital member of the Indian team in all three formats. He is the number one bowler in the ODI format. He was the highest wicket-taker for the side in the ICC Men's World Cup 2019.