A series win here would certainly raise Kieron Pollard's profile from a T20 freelancer to an able leader. 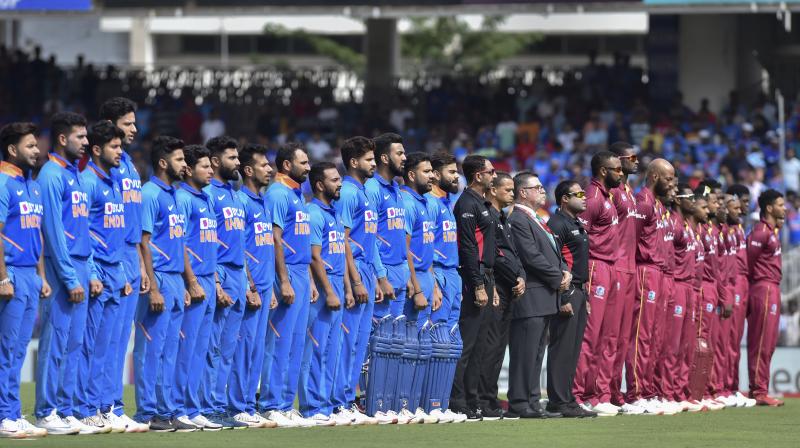 India will have to get their bowling combination right after the hiding in Chennai when they take on a buoyant West Indies in the second ODI here on Wednesday, aiming to keep the three-match series alive. (Photo: PTI)

Visakhapatnam: India will have to get their bowling combination right after the hiding in Chennai when they take on a buoyant West Indies in the second ODI here on Wednesday, aiming to keep the three-match series alive.

A series win here would certainly raise Kieron Pollard's profile from a T20 freelancer to an able leader but a blinder from Rohit Sharma or another hundred from Virat Kohli on a batting belter can't be ruled out.

It wasn't a nightmarish bowling performance in Chennai by any stretch of the imagination but not being able to defend 287 on a slow Chennai track left the team management with a few points to ponder.

With the par-score at the ACA-VDCA stadium here set to be in the 320-plus range, a fifth specialist bowling option could be mulled upon considering the plight the hosts faced in the last game with Shimron Hetmyer and Shai Hope beautifully planning the chase with their respective hundreds.

The biggest reason for the setback in Chennai was spinners Ravindra Jadeja (0/58 in 10 overs) and Kuldeep Yadav (0/45 in 10 overs) being rendered ineffective.

Hope and Hetmyer didn't murder the attack but did enough during the middle overs to ensure 103 runs came without taking any adventurous route.

They chose their bowlers perfectly and as a result, debutant Shivam Dube leaked 68 runs in 7.5 overs, indicating that he is certainly a "work in progress" as far as his bowling is concerned. However, it's a tricky path for India to tweak their playing XI considering what exactly they have in their reserves.

They have Mayank Agarwal, the reserve opener, who is unlikely to get a chance as Rohit Sharma and KL Rahul are set at the top. Then they have Manish Pandey, the reserve middle-order batsman, who can only be replaced at No 6 in place of Jadhav. And Jadhav did nothing wrong in Chennai, scoring 40 off 33 balls with his typical 'chip and charge' game.

The questions that people are raising is about Jadhav not being given another go after he was hit for 11 in his solitary over.

On a Chennai track, if he couldn't be risked for a second over, what will happen on a batting friendly Visakhapatnam pitch where he could be hit through the line easily.

So will Pandey, with a better range of strokes, be an option instead of Jadhav? If that's the case then they will have to go for a specialist fifth bowler -- either seamer Shardul Thakur or leg-spinner Yuzvendra Chahal.

In case India go for either of the two, then the axe may fall on one of the two all-rounders, Dube or Ravindra Jadeja.

Dube was sent to bat at No.8 in the last game and might not get to bat here irrespective of whether India bat first or second.

In that case, Shardul could be an option as Jadeja's experience in all departments is a necessity.

However, it is a well-known fact that Jadeja struggles on good batting surfaces which creates a case for Chahal's conventional leg-breaks.

For the West Indies, Hetmyer has undoubtedly been one of their key performers and getting his wicket will be the key for the Indian team.

West Indies' pacers were also on the money as Sheldon Cotterell and a fit-again Alzarri Joseph did a good job both at the beginning and the back-end of the Indian innings.

Keemo Paul also did his bit and the West Indies pace attack could be lauded for using a lot of variations including the slower deliveries to good effect.

But on a true pitch like Visakhapatnam, it will be a different challenge for the pace troika.