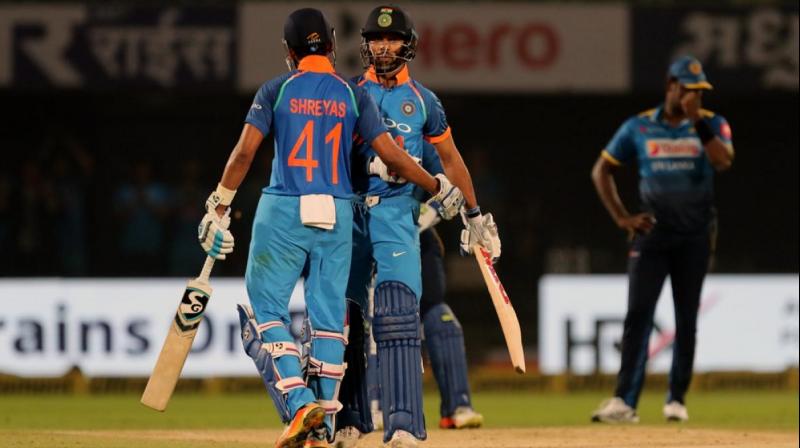 Visakhapatnam: Team India clinched the 3-match ODI series against Sri Lanka at Visakhapatnam on Sunday after registering a thumping 8 wicket win in the series decider.

After the hosts won the toss and elected to bowl, Lankan started on a solid note, despite the early dismissal of Danushka Gunathilaka. Upul Tharanga along with Sadeera Samarawickrama continued the charge and look set for a big score before Indian bowlers bounced back.

Placed comfortably at 136-2, Thisara Perera’s men bundled out for a paltry 215 in the end as the spin duo of Kuldeep Yadav and Yuzvendra Chahal ran riot.

In the second innings, India made light work of the chase despite losing skipper Rohit Sharma early on. Shreyas Iyer and Shikhar Dhawan struck a 135-run stand to take the game away from Lanka’s hands.

Another bilateral series win for India and the first one for Rohit Sharma as India captain.

WICKET! Oh dear, What an opportunity to get a 100 today was for Iyer and he's thrown it all away. Goes on the backfoot and attempts to smack Perera over mid-on. Eventually, finds Lakmal and that's the end of a fine innings.

50 up for Shreyas Iyer along with the 100 for India! Both have taken charge and put India in control. Iyer, particularly has been impressive with his pull shots and his strokes through the covers.

And young Shreyas Iyer gets to a well-made half century. His second in ODIs. Such an impact innings this #TeamIndia #INDvSL pic.twitter.com/eOlSWvdh31

50-run stand between Iyer and Dhawan! Both have complemented each other well after Rohit's dismissal with a healthy run rate.

WICKET! Rohit Sharma has departed for 7 runs, as the Lankans get a crucial wicket.

Visakapatnam: India bowled out visitors Sri Lanka for 215 as the hosts took the upper hand in the third ODI here on Sunday.

After losing Danushka Gunathilaka early, Upul Tharanga and Sadeera Samarawickrama put up a 121-run partnership, after which the latter departed for 42 runs. Meanwhile, Tharanga got out for 95 runs.

At 136-1, Sri Lanka looked set to post a big total, but their plan was damaged by the Indian bowlers, especially with the spin duo of Yuzvendra Chahal and Kuldeep Yadav. Both of them took three wickets each.

Captain Thisara Perera, meanwhile, had an innings to forget as he got out for just six runs.

WICKET! Sachith Pathirana has departed for just seven runs, as Hardik Pandya joins the party. Sri Lanka are on the verge of getting bowled out once again.

WICKET! Angelo Mathews has been bowled by Yuzvendra Chahal, as he departs for 17 runs. The hosts are on a roll here.

WICKET! Kuldeep Yadav has done the trick again, as he removes Niroshan Dickwella courtesy a catch by Shreyas Iyer. Two wickets in the over.

WICKET! Upul Thranga has departed for 95, five runs short of his century, as he is stumped by MS Dhoni.

He's got eyes like a Hawk. How good was that from @msdhoni #TeamIndia #INDvSL pic.twitter.com/Peh8UWti5O

WICKET! Finally, a breakthrough. Yuzvendra Chahal strikes to break Samarwickrama-Tharanga stand as Dhawan takes an easy catch to dismiss the right-hander. The luck has finally run out for the Sri Lankan youngster.

Sri Lanka are in no mood to slow down here. While Kuldeep has done well, Samarwickrama and Tharanaga have targetted Chahal and Pandya to score at brisk pace. The two have brought up 100-run partnership as India's search for wickets continues.

HUNDRED! Sri Lanka have crossed the 100-run mark and made sure India did not restrict the run flow after Gunathilaka's early departure. While Samarwickrama is riding his luck, Tharanga has done well to keep India in check.

FIFTY! Upul Tharanga has got to his 36th ODI fifty at a time when the visitors needed some boost. A great comeback by the top-order batsman.

The ninth over has been expensive for India. Five fours from the first five balls helped Sri Lanka go well past 50, and also bring up the 50-run partnership between Sadeera Samarawickrama and Upul Tharanga. Tharanga is on 48.

WICKET! Danushka Gunathilaka has played a shot too many and Sri Lanka have lost their first wicket. He tried to go over mid-on off Jasprit Bumrah but that plan has clearly not clicked as Rohit Sharma took an easy catch.

In the third and final ODI of the series, Rohit Sharma has won the toss and India have chosen to bowl at the Dr. Y.S. Rajasekhara Reddy ACA-VDCA Cricket Stadium, Visakhapatnam here on Sunday.

Rohit Sharma, who is leading the Indian side in the absence of Virat Kohli, will hope to win his maiden ODI series as India captain and complete yet another series win when the hosts face Thisara Perera’s Sri Lanka in the third and deciding ODI.

India have to make a forced change to their winning combination from Mohali as Kuldeep Yadav replaced ill Washington Sundar in the playing XI.

#TeamIndia have won the toss and elected to bowl first. Just one change - Kuldeep Yadav back in place of Washington Sundar #INDvSL pic.twitter.com/Adx0EsKhvZ

Sri Lanka too have made one change to their side as Lahiru Thirimanne made way for Sadeera Samarwickrama.

Here's how the pitch at the ACA-VDCA Cricket Stadium may play out today:

Meanwhile, India have not lost a series at home since losing the one-dayers 3-2 to South Africa in 2015, and will hope to maintain that record in Visakapatnam. In 2017, the Lankans have won five out of 27 ODIs, and will look to sign off woith a win.

In the last match, it was captain Rohit Sharma’s masterclass of 208 which helped the hosts put up a total of 392-4, and in turn restrict Sri Lanka to 251-8 from 50 overs.

For India, Shreyas Iyer will hope to continue his good form, after scoring 88 in the previous match, putting up a match-winning 213-run partnership with Rohit in Mohali.

Washington Sundar, too, picked up his first international wicket on Wednesday, when he bowled out Lahiru Thirimanne on Wednesday.

The key man for Sri Lanka will be former skipper Angelo Mathews, who scored

What time does the match start?

The match is scheduled to start at 1.30 pm IST.

Where can the match be viewed?