Class and consistency come together in Mayank Agarwal batting

The pitch played true, the weather was excellent, and above all, we are now in the throes of the inaugural Test World Championship. 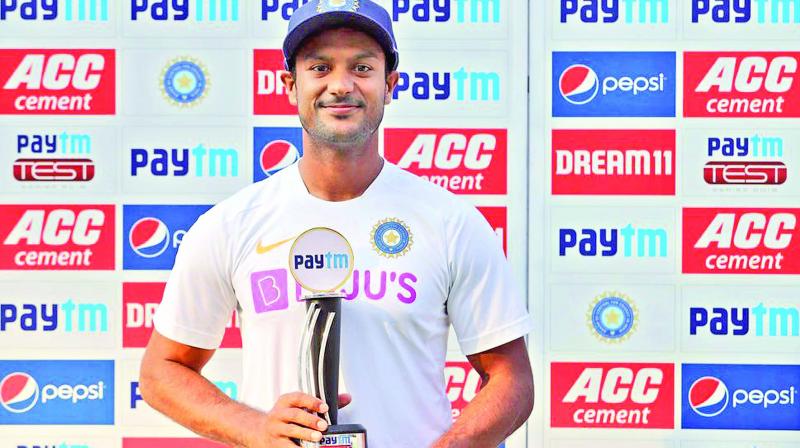 It was terribly disappointing to see Bangladesh keel over so easily in the first Test at Indore. Winning the toss was just about the only thing that went right for them. The batting was badly exposed, bowling was flayed and the fielding was below par, adding up to a pitiable performance.

Frankly, few would have expected Bangladesh to pull off an upset with a side considerably weakened in the absence of senior pros Shakib Al Hasan and Tamim Iqbal (not touring) and Mustafizur Rahman who was injured. But a more determined contest was certainly expected.

The pitch played true, the weather was excellent, and above all, we are now in the throes of the inaugural Test World Championship.

Every match has significance in terms of points won or squandered. Every player in every team has to be conscious of this.

No team, however inexperienced, can take the field with a sense of hopelessness, as seemed to be the case with Bangladesh. That the Test was completed in less than three days tells the story of how abject they were in the field.

That said, I’d like to flip the narrative from here and focus on India, who made Bangladesh look so hapless on a batting beauty. To win by an innings and 130 runs, despite a few hiccups along the way, shows how brilliantly the Indian team is playing currently.

The fact that they could overcome the cheap dismissals of their two main batsmen Rohit Sharma and Virat Kohli — both of whom have been in prolific form this season — to post a formidable total was quite remarkable.

At 119-3, it appeared that India might finish with 300-325 at most, but went on to post 493-6 before declaring. This reflected not just depth in the batting, about which there has been prolonged concern, but also intense desire to move the game ahead stridently.

This was evident from the scorching scoring rate. India’s 493 runs came in just 114 overs. Towards the latter half of the innings — with Jadeja and Umesh Yadav going hammer and tongs — the scoring rate was hovering around 10! By the time the declaration came, Bangladesh had thrown in the towel.

It was good to see Kohli eschewing niceties (prevalent for so long in Indian cricket) of allowing Jadeja to chase a century. There was so much time remaining in the match that prolonging the innings would hardly have been faulted. How gratifying to see a new mindset which puts the team’s interest above the individual’s!

The highlight of the Indian innings, of course, was Mayank Agarwal’s 243, his second double century since this season began. In eight Tests since breaking into the Test side, Agarwal has scored 800-plus runs, which is phenomenal.

He is equally at ease against pace and spin, has a penchant not just for centuries, and also extends these into skyscraper scores. More importantly, he is a dominating batsman, scoring runs at a fast clip to keep the bowling under constant pressure.

Class and consistency come together in Agarwal’s batting. It’s still early days in his career to make any prediction for the future. But there is no doubt that he has been a great find. Pushing 29, and having struggled to get to this stage, he seems intent on making up for lost time.

While Agarwal was surely the player of the match, the story of the Test had to be the success of India’s pace bowlers, Ishant Sharma, Umesh Yadav and Mohammed Shami, who picked up 14 wickets between them, scuttling Bangladesh in both innings.

Usually, spinners are feared on Indian tracks. But as seen even against South Africa earlier, India’s fast bowlers have been hostile and penetrative, and absolutely thrilling to watch.

All three are quick, but with varied skill sets, combining to make a potent force. Add to them Jasprit Bumrah when he is fit and it not only gives a sharp edge to the Indian attack, but in fact has added a fascinating new dimension to Indian cricket.