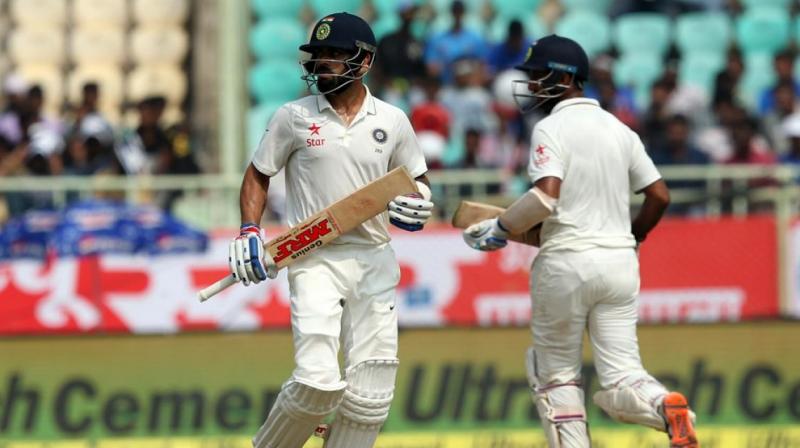 India will bank on Cheteshwar Pujara and Virat Kohli to score big and bat long as the team looks to notch up a big total. (Photo: BCCI)

Visakhapatnam: India were 92 for two at lunch on the opening day of the second Test against England in Visakhapatnam on Thursday.

Skipper Virat Kohli was 35 not out and Cheteshwar Pujara was on 37 after India won the toss and elected to bat.

Stuart Broad wasted no time as he dismissed KL Rahul for a duck in the second over. The Indian right-hander, who made a comeback to the side replacing Gautam Gambhir, edge one to the third slip where Ben Stokes made no mistake holding on to an easy cacth.

Murali Vijay, meanwhile, brought up his 3000 runs in Test cricket. However, his joy was shortlived after James Anderson ended his stay in the middle with a sharp bouncer.

Pujara and Kohli had a few nervous moments in the middle; courtesy their running between the wickets. But the pair made sure to sort out the confusion and went on to steady the Indian innings.