Really, does Hardik have the head for finisher's role? 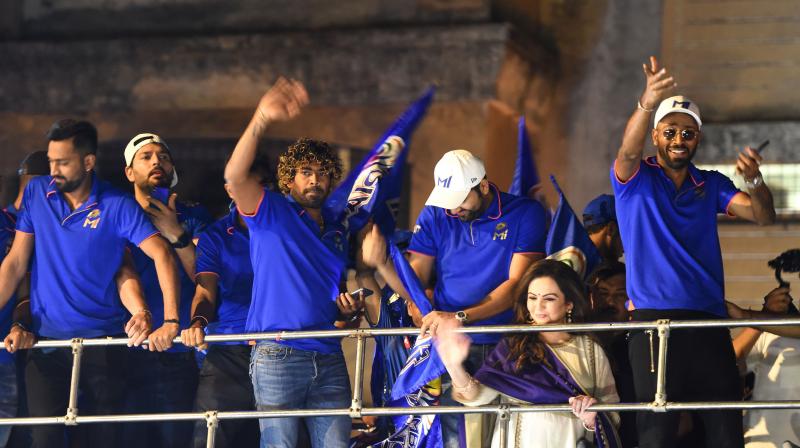 The mercurial Hardik Pandya (right) celebrates with Mumbai Indians teammates last year's IPL triumph but does he have the cool to be the team finisher? (AFP)

Abu Dhabi: The IPL opener between Mumbai Indians and Chennai Super Kings here on Saturday, September 19, 2020, will be a hard test for India fast bowler Hardik Pandya. It will be the flamboyant allrounder's first game in a year, having undergone back surgery for a stress fracture last year.

Getting Hardik into fighting shape is a priority for Mumbai Indians coach Mahela Jayawardene: he needs to groom a few more finishers if the champions are to hold on to the title this year.

"We are mindful that Hardik is coming back from an injury but he is looking very good in the nets," said the former Sri Lanka great Mahela in a virtual press conference on Thursday.

"Both the Pandya brothers have been fantastic for MI over the last three or four years. They bring a lot of energy to the group."

It's no surprise that Jayewerdene is looking to groom Hardik as a finisher. The all-rounder has the technique and the arsenal for it but does he have the cool temperament of a Glenn Maxwell or an MSD? The finisher's role is a nip-and-tuck operation, and Hardik is an explosive player who can turn a match on its head. Can the man fit into the role?

"We have used him (Hardik) in different roles in the past and we have quite a number of other players who can fit into that role as well, so we have a few options," said the MI coach, indicating that it's not a done deal yet.

Mumbai Indians are also looking at the Australian dasher Chris Lynn as an opening option but Jayawardene made it clear he's not toying with the idea of tinkering with the Rohit Sharma-Quinton de Kock opening pair.

"Having options is always great. Lynn is a great addition to the squad but the combination of Rohit and Quinton has been there for us. They complement each other well," he said.

"Why fix something that ain't broken?"

Another problem for the MI coach is Jasprit Bumrah's workload management, which just like Hardik's needs to be precise, considering that India will be playing a four-match Test series against Australia Down Under later in the year.

Jayawardene is happy that Bumrah has worked extensively on his strength and conditioning as well as skills during the coronavirus lockdown.

"Boom (Bumrah's nickname) has been training really hard during the quarantine period because of Indian commitments (which got postponed). He has had a lot of bowling back home<" said Jayewerdene.

"Bumrah looked after himself very, very well during the quarantine period and he is quite eager to go out and perform," Jayawardene concluded.