The first match between India and South Africa was abandoned due to rain. 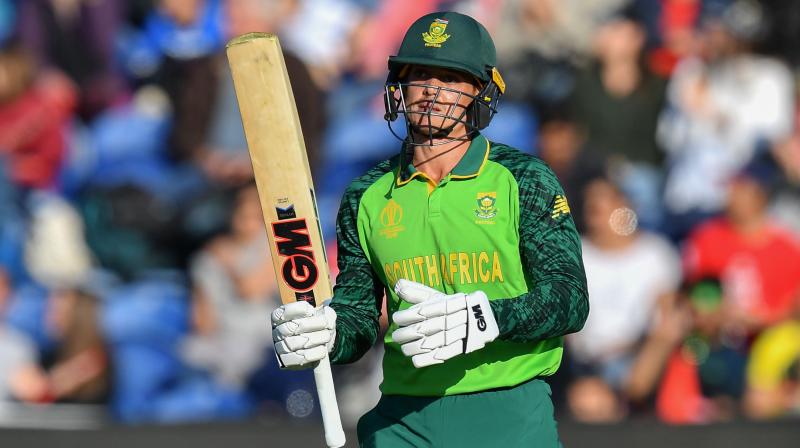 Mohali: As India and South Africa get ready for a face-off in the second T20I of the three-match series, Proteas skipper Quinton de Kock said that the added responsibility of captaincy is a new stepping stone in his career.

"I am not too concerned. It is a new stepping stone in my career. It gives me extra responsibility in the team. We will see how it goes, it can affect me positively or negatively, but it is too early to say. I will try to do my best," de Kock told reporters.

The first match between India and South Africa was abandoned due to rain. Proteas skipper said that the match getting called off was not ideal as every game is crucial heading into next year's T20 World Cup in Australia.

"Obviously it is a bit of negative. We would have liked to play at Dharamshala. We would like to play as many matches heading into the 20-20 World Cup next year so losing out on one game is not ideal. But it is what it is. It is now a two-match series. It would be an exciting format so we will see how things go," de Kock said.

Indian skipper Virat Kohli and Proteas pacer Kagiso Rabada have been engaged in many battles on the field. De Kock expects another fierce encounter in the series and said it would be great for fans to see the battle between two top players.

"They are both good players. It is a good competition between both Virat Kohli and Kagiso Rabada. They both are aggressive in their style of play. It would be great for fans to see the battle between them both," De Kock further said.

The wicket-keeper batsman de Kock was part of Mumbai Indians which won the Indian Premier League (IPL) this year and he said that winning the title is so far the biggest achievement of his cricketing career.

After the T20I series, India and South Africa will lock horns in the three-match Test series which will be part of World Test Championship.

However, de Kock said that the entire focus of the team is currently on the T20I series.

"When you talk about World Test Championship (WTC), we haven't quite got there yet. We are focusing on T20Is, once those games are done, then we will think about the WTC," de Kock added.

South Africa takes on India in the second match tomorrow at Mohali.