Openers Dimuth Karunaratne and Lahiru Thirimanne were involved in a record opening stand of 133 runs. 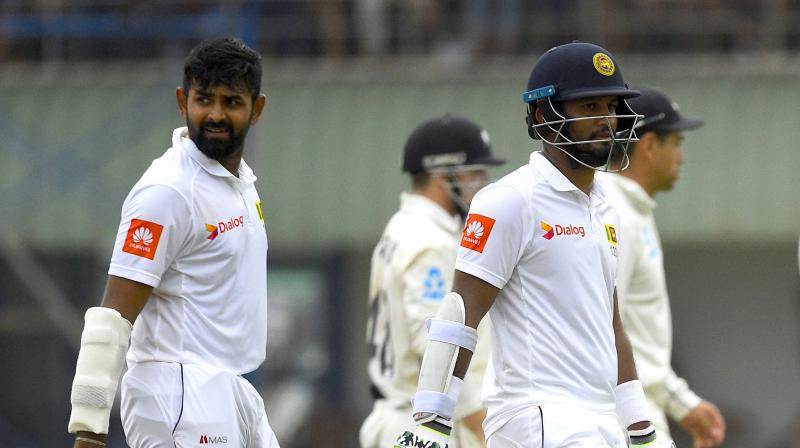 Karunaratne was unbeaten on 71 off 168 balls with two boundaries while Thirimanne was on 57 having faced 132 deliveries and hit four fours. (Photo: AFP)

Galle: Sri Lanka's batters set the stage Saturday for a thrilling final day, reaching 133 without loss at stumps on day four as they chased 268 to beat New Zealand in the first Test in Galle.

Openers Dimuth Karunaratne and Lahiru Thirimanne were involved in a record opening stand of 133 runs and benefited from some sloppy fielding by the tourists. It leaves Sri Lanka needing a further 135 runs to record their first win in the World Test Championship.

Karunaratne was unbeaten on 71 off 168 balls with two boundaries while Thirimanne was on 57 having faced 132 deliveries and hit four fours. They were in no mood to withdraw to the dressing room but bad light ended play 34 minutes before schedule.

Batting fourth in Galle is not the prettiest thing for batsmen and the highest successful run chase here is 99. But this track held together and there weren't any demons for batsmen making life difficult.

Both openers were slow off the blocks with the first boundary coming in the 22nd over. Karunaratne was the first to reach half-century with a cut shot off William Somerville. It was the Sri Lankan skipper's 23rd Test fifty.

Thirimanne reached his sixth half-century with a flick for four off Ajaz Patel. After a series of low scores, he was under pressure to post a decent figure and the half-century will have saved his place for the next Test in Colombo.

A bat-pad chance off Thirimanne when he was on 29 fell just short of short leg fielder Tom Latham. But the luckier of the two openers was Karunaratne, who was put down twice. Latham spilled a chance at short leg when he was on 58 off the bowling of Patel and in the very next over B.J. Watling missed a stumping chance off Somerville.

The duo went onto establish the highest partnership by a Sri Lankan opening pair in the fourth innings. The previous best was 110 by Roshan Mahanama and Chandika Hathurusingha against Australia at R. Premadasa Stadium in 1992.

It is also the highest partnership by a Sri Lankan pair for the first wicket against New Zealand. Mahanama and Hathurusingha had posted 102 in 1992 at SSC against the late Martin Crowe's side.

Earlier, resuming from the overnight score of 195 for seven, New Zealand posted 285 with Watling top-scoring with 77 runs. He was well supported by the tail with William Somerville hitting his highest score in first-class cricket -- 40 not out.